When a little boy appeared at the side of a former Benson Hotel guest’s bed, her first instinct as a mother to a three-year-old son “was to reach out to the boy and pull him into bed.” The results were terrifying. “As I touched his arm it actually felt solid for a moment…He jumped in my face making a scary face and frightened me…I hid under the cover for a second thinking he’s playing around being silly. I actually peeked out again and there he was still standing there. I reached out again and he jumped in my face again. After that I positioned the cover in front of my face to not see him anymore even if I happen to open them.” The ghost of the little boy is said to have taken up residency in the 9th floor of The Benson hotel in Portland, Oregon, along with various other ghosts and apparitions.

One of the ghosts is said to be that of the establishment’s previous owner, Simon Benson. He is often seen roaming through the halls and corridors of the 12th, 9th, and 7th floors. Guests that come in contact may want to keep a firm grip on their cocktails, as it is said that Benson did not advocate drinking in his hotel, and his spirit has been known to knock drinks over. One former employee happened upon a man who was dressed decidedly less formal than the staff and crowd at The Benson’s London Grill. “I saw a man in overalls with a plaid shirt. I thought it was strange, as we wear tuxedos, and so most people are well dressed. I looked up and right when I could say ‘can I help you?’ he was gone…When I described him, someone reminded me that Simon Benson was a lumber baron.”

Two female spirits coined “Lady in White” and “Lady in Blue”, respectively also haunt the hotel. The Lady in White roams the corridors, while the Lady in Blue is said to appear as a reflection in the lobby’s mirror. A particularly friendly ghost is known as the “Helpful Porter”, who is said to have helped a guest with a disability who found himself having difficulty getting into bed. The porter vanished immediately after the man was safely in bed.

Both gorgeous and ghoulish, a stay at The Benson hotel is sure to offer an unforgettable experience. 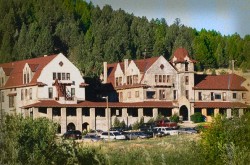 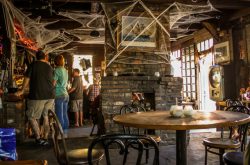