McMenamins White Eagle Saloon and Rock & Roll Hotel has been in business in one form or another since 1905. From an alleged opium den to a brothel to secret tunnels there has been a lot of activity at the White Eagle. This raucous history has paved the way for lots of ghost stories.

Early Years at the White Eagle

The building was constructed in 1899 and opened as the White Eagle Saloon in 1905 by Bronislaw Soboleski and William Hryszko. At that point in time, the area was mostly residential. The owners were both of Polish heritage, and the name White Eagle was a reference to the flag of Poland at the time. Over a relatively short period, the area transitioned to industrial. Portland became a major sea port and railroad hub, and the White Eagle changed from being an ethnic corner bar and meeting place to a hot spot for laborers and sailors passing through.

Some parts of the White Eagle’s history can be confirmed while other parts are based on rumor and speculation. As time passes the rumors and speculation tend to become more embellished. What is known for certain is that shortly after the turn of the last century the White Eagle was a rough place to hang out. There were lots of fights and drunkenness. It was no place for polite society. A brothel operated out of the second floor. There are stories circulating that the brothel business overflowed into the basement, and at one point the basement may have been used as an opium den.

The White Eagle also has a history of kidnappings or shanghais. Essentially, if a ship was short staffed sailors would kidnap fellow bar patrons who were too inebriated to realize what was happening. The next day the newly minted sailor would wake up aboard a ship that had left port and they find themselves on a new career path. Portland did have a serious problem with men being shanghaied. There are no documented cases of White Eagle patrons being taken. Although, it is very likely this did happen there since it was such a popular saloon with sailors. There is a rumor that there was an underground tunnel used to transport shanghai victims from the basement of the White Eagle to the docks. This is a popular story told about many older buildings in the area.

People report hearing a woman crying. Many believe this is Rose, a prostitute who worked at the White Eagle when the brothel was part of the business plan. The story goes that Rose fell in love with a customer. She rebuked her customer’s marriage proposal out of fear that her boss would retaliate if she tried to leave. Her lover became so enraged he beat her to death.

There is also the case of Sam. Sam was apparently taken in by the owner as a child. He grew up at the White Eagle, taking care of maintenance and janitorial work in exchange for room and board. He lived at the White Eagle his entire life. He even died in his room. People who are familiar with the White Eagle believe Sam never left.

There are a lot of unexplained goings on throughout the building. For instance, freezer doors in the basement reportedly open and close on their own. On the second floor, all of the doors and windows have mysteriously opened and closed on their own at one point or another. There are reports of toilets flushing on their own and toilet paper flying around the ladies room. Coins have been known to fall from the ceiling of the basement. When there is no music playing employees in the basement claim they can hear faint music. Chairs move unexplainably. People who visit the White Eagle have reported feeling cold hands grab them when there was no one around. In one of the more frightening instances, a waitress was half pushed and half pulled down the stairs leading to the basement.

Many psychics who have visited the establishment report feeling hostile energy and death in the basement. The main floor exudes mischievous, playful energy. The second floor emanates sadness.

In the first several decades of its existence, there were some sordid activities and questionable behaviors that have lent themselves to the myth and legend that surrounds this Portland institution. Starting in the 1970’s live music was added to the lineup and has been a staple of the White Eagle ever since. These days the White Eagle is part of a family-owned chain of brewpubs, McMenamins.

Check It Out For Yourself

The White Eagle is located at 836 North Russell Street in Portland. It is open Monday through Thursday, 11 AM to 1 AM. Friday and Saturday, 11 AM to 2:30 AM, and Sunday, 4 PM to 11 PM. There are 11 hotel rooms on the second floor. Check-in is at 4 PM and check-out is at 11 AM. The rooms are described as having a rustic, old world charm. There is a single shared bathroom for all of the rooms. The rooms are located directly above the live music venue, so keep that in mind when booking. Most bed and breakfasts are built with the original intentions of being an inn for weary travelers, however the Beechwood Inn of Cape Cod, Massachusetts originally was… Read more… 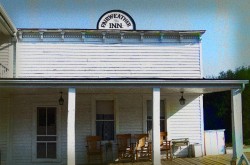