After killing Alexander Hamilton in an infamous pistol duel in 1804, Aaron Burr retreated to New Hope, where it is said that he stayed on the grounds of what is now called the Aaron Burr House Bed and Breakfast.

The Ghost of Aaron Burr, Sir

Witnesses report that the ghost of Aaron Burr has been seen roaming the house and peering around corners. Burr’s ghost appears more often on the second floor and the 2nd staircase. People have even reported the sensation of tugs on their arms or sleaves. Others have reported seeing Burr’s ghost in town always looking back over his shoulder as if he’s being hunted or followed.

Pardon me are you Aaron Burr’s ghost, sir? 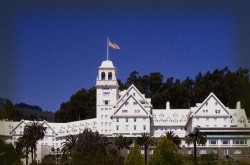