Situated just three miles west of Miami, Florida is the tropical and picturesque city of Coral Gables. The hotel was designed as part of the City Beautiful Movement of the early twentieth century that sought to increase the art, splendor, beauty, and charm of the area in various outlets. One such product was the Biltmore Hotel, but this aesthetically beautiful hotel has also become known for its hauntings and paranormal activity.

The Biltmore Hotel was constructed in 1926 by a young man named George Merrick who was also the key founder of the city of Coral Gables. The four hundred room multi-story hotel had ballrooms, tennis courts, country club attachment, custom golf course, and a twenty-three hundred square foot swimming pool which at the time was the largest swimming pool in the entire world. Fashion showcases, aquatic pool shows, and the surrounding luxury of the hotel drew in royalty from Europe, Hollywood celebrities, infamous gangsters, and even future U.S. Presidents.

A Brief History of the Biltmore Hotel

During the onset of World War II, the hotel was seized and operations temporarily suspended as it turned into a makeshift Army hospital. At any given time, close to twelve hundred wounded soldiers were housed there. Once the war ended, the hotel was further converted into a VA hospital until 1968 when it closed down completely. Vandals and thrillseekers began to enter the grounds at night when finally in 1992, the hotel was given new life and completely restored to glory and became fully operational. That’s when the paranormal stories began to emerge.

Ghosts of the Biltmore Hotel

One of the most sighted apparitions is the “Lady In White.” The legend of the Biltmore Hotel’s “Lady in White” is that her young child somehow climbed over a high balcony railing outside her room. Sadly she could not catch the child before they both fell to their deaths. Years later, her crying spirit can be seen floating around the 13th floor, clad in white. Sometimes her ghost is spotted on exterior hotel balconies.

Also on the 13th floor, Prohibition-era gangster Thomas “Fatty” Welch was shot to death in his room by a rival gangster in the 1920s. Over the years, guests and employees have reported odd chuckling sounds that emanate from nowhere. Other times, the lights in the rooms have turned on and off, and objects come up hidden. Some guests have reported seeing the reflection of a smiling man of portly size in the bathroom mirrors standing behind them, only to turn and see nobody there.

Another haunted floor is the seventh, which housed many of the dying patients before the hotel reopened. One of the more disturbing claims is that a former employee had seen severed limbs manifest through the walls. Another former employee claimed that even hardened security officers from the property couldn’t take much of the paranormal encounters on this floor and routinely quit right alongside a concierge who resigned as well. They claimed to see disembodied spirits, experience frequent cold spots, and the opening and closing of doors in empty rooms. At one point, hotel housekeepers routinely wore sage pinned to their lapels to ward off the numerous ghosts haunting the many floors of the Biltmore.

Despite all the activity in the hotel, the Biltmore stands as the prized hotel of the Coral Gables community. Just as lavish and grandiose as in the many decades before, this hotel is a once in a lifetime visit that’s well worth the trip for its history, beauty, and luxurious modern day amenities… And the ghosts of course. 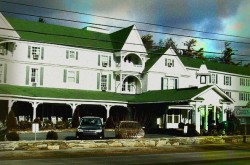 Is the Savoy Hotel in Kansas City haunted? Built in 1888, Hotel Savoy in Kansas City, Missouri is billed as the oldest continuously operating hotel west of… Read more…