New Bern, North Carolina is a sleepy coastal town on the Atlantic Ocean. Picturesque with small-town charm, it is a welcome tourist spot away from all the hustle and bustle of nearby Wilmington, and even Myrtle Beach. Land originally packed to capacity and then some, the Cedar Grove Cemetery was the best place to bury a loved one. Emotions at any cemetery are always high, but have you ever heard of one where the actual cemetery gate itself weeps for you?

The cemetery itself was constructed all the way back in 1800 and it is considered one of the oldest cemeteries in North Carolina. Clocking in at just over thirteen acres, the cemetery is situated in the heart of New Bern’s downtown area near the historical district. A massive and surprisingly detailed gray, coquina shell wall surrounds the cemetery, as well as a staggered triple entrance arch that was added in 1853. Known by many locals as “the Weeping Arch”, it is in a paranormal class all its own.

Is the Cedar Grove Cemetery haunted?

The Weeping Arch dates all the way back to not long after the cemetery was first constructed. Even then, people were remarking that when passing underneath the arch, small droplets of water would descend and fall onto a person, although sometimes the water has a red-rust color to it. Activity picked up over the decades to where the droplets would manifest if a funeral party were to pass underneath. Somehow a twisted urban legend developed that anyone passing under who gets hit with a droplet will be marked for death next.

The cemetery is also said to house over three hundred Confederate soldier graves on the property. Various paranormal enthusiasts have spoken about grave robbers turning out in the cemetery sometime around the turn of the Twentieth Century. These particular robbers dug up Confederate graves to try and cash-in on any Civil War era memorabilia. However, once the graves and bodies were disturbed, it is believed that this somehow awakened the spirits. People have reported seeing spirits of men in period piece Civil War clothing walking around tombstones before disappearing.

The Cedar Grove Cemetery today is one of the more popular tourist destinations in New Bern and even earned a spot on the National Register of Historic places in 1972. Today the cemetery is fully accessible by the public and welcomes visitors. One of the more popular events held adjacent to the cemetery is the yearly Ghostwalk, hosted by the New Bern Historical Society. It’s a weekend-long, family-friendly event that takes visitors of all ages on a historical tour of the cemetery as well as around town while educating them on the various spirits of the past……just be mindful and forewarned of the Weeping Arch. 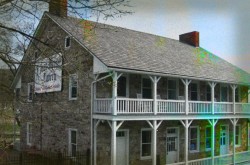