There’s a slight chill in the air. The lights flicker. While you may be able to chalk such happenings up to an over-active imagination, it’s a little more difficult to explain the full-fledged apparitions reported by some guests at this Rawlins, WY, B&B.

The ghostly visions most reported are of a woman and two male children. According to local legend, one of the kids may be the ghost of Cecil Ferris, a boy who was accidentally shot and killed when the B&B was a home. It’s been suggested that the otherworldly woman seen here may be Cecil’s mother. Our House of St. Augustine 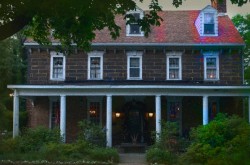