Looking for a smaller, more relaxed place to explore? Savannah, Georgia is a hidden gem right near the Atlantic Coast that is most certainly every bit as haunted as its Southern counterpart, New Orlean,s minus all the big city hustle. Looking for someplace to stay? The Foley House Inn is a hauntingly good choice to start with.

The Foley House Inn is a charming bed and breakfast that is dead center to Savannah’s ever-popular Historic District and is, in fact, the oldest one in the city. It was originally built in 1896 by an Irish immigrant woman named Honoria Foley, who along with her husband, has purchased the land after it was badly burned from the Great Savannah Fire of 1889. The land was cleared and the Foley family constructed the Gothic brick-style, three-story inn on the site. Just a single year after opening, a mild renovation was done, and the skeletal remains of a man were found mysteriously interred within the walls. Ever since that chilling discovery, the paranormal activity began.

Over the years, the various owners and operators of the Foley House have affectionately dubbed the spirit that haunts the place, “Wally”. Many believe that the disturbing of his remains is what activated his paranormal powers within the inn. The most unexplained of his antics are the incredible rushes of wind that are felt. Guests and employees alike have reported being alone in a room and suddenly an intense rush of air will blow right past them, more perplexing when the air unit is off, the windows, closed, and the doors shut.

Other times, Wally has caused light banging sounds in the walls, no doubt paying ghostly homage to his origin. Some have even claimed to see Wally manifest in period dress, complete with a top hat and a smile on his face. Today, business at the Foley House is better than ever and it is also featured on multiple local ghost tours. Captain Tibbals built the hotel as a tavern and billiard parlor in 1889. People have reported seeing the captain haunting the halls today. Read more… 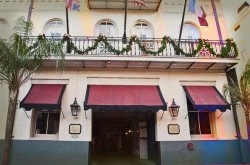