The original Garsden Hotel dates back to the turn of the century, but after a fire swept through the property, the owners rebuilt it in 1929. Eleanor Roosevelt and other famous guests stayed there over the years, but local legend says that some of the hotel’s regular guests never moved on.

The most haunted room is, without a doubt, Room 333. Multiple television shows dealing with the paranormal and supernatural filmed at the hotel over the years, and many of those shows focused specifically on that room. The woman who haunts this room hanged herself in the room, leaving her spirit behind. In addition to feeling cold spots, guests also hear strange banging and scratching noises that seem to come from inside the walls. They also report feeling uneasy and nervous while staying in the room. One woman abruptly checked out in the middle of the night after claiming that an invisible presence climbed in her bed.

Both guests and workers encountered the ghost of an old cowboy. As hundreds of cowboys and ranchers passed through the hotel over the years, there is no way to know who he might be. At least one worker spotted a man in a long overcoat with a cowboy hat perched on his head watching her in the basement. When she stepped closer, he stepped back and disappeared into the shadows. He may be the same ghost one guest saw in her shower. Though there are several ghosts haunting the Garsden Hotel, employees claim the spirits are harmless and even feel comfortable working while ghosts watch them from the shadows. 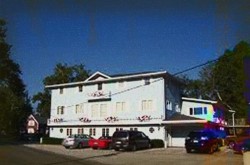