The Legend of Haunted Clinton Road, America’s Most Cursed Highway

In West Milford, New Jersey, the eerie Clinton Road stretches almost 10 miles, has one of the country’s longest traffic lights, and is oozing with unusual phenomena. The road may not be much to see at first, but when you consider Clinton Road’s history, it gets a lot more interesting.

The road and forest stretching around the haunted Clinton highway are bursting with supernatural occurrences and legends, from ghost sightings and strange creatures hiding in trees, to gatherings of witches, Satanists, and the Ku Klux Klan in the dead of night. There are very few homes on the road, making anyone’s journey through it quite lonely, or as a local police chief put it, “It’s a long, desolate stretch and makes the imagination go nuts.” Whether is just people’s imaginations or not is up for debate. It’s a fact that strange things happen near the haunted Clinton Road and to many who have dared enter its woods.

The most talked about paranormal occurrence on the long stretch of Clinton Road is said to happen at midnight when the spirit of a young boy haunts a bridge near “Dead Man’s Curve.” The story of how the ghost boy came to rest on Clinton Road differ. Some say he fell into the river and drowned when he was sitting on the edge of the bridge, others say he fell into the water to avoid getting hit by an oncoming car. 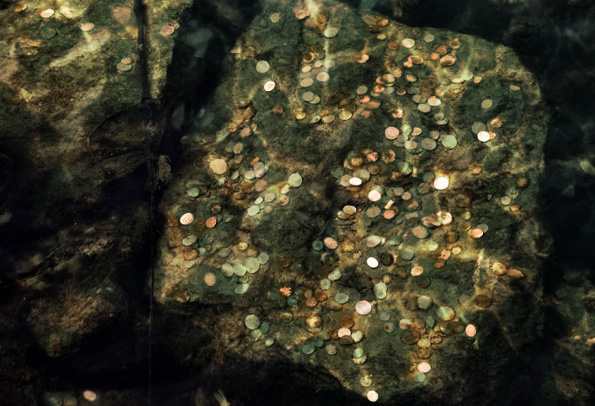 They say if you sit on the bridge you can summon the ghost boy by throwing a coin into the water below. The ghost boy is said to return at midnight and place the coin back on the bridge. Other’s claim he will either toss the coin back onto the bridge or place it back on the road the next morning. Some have reported him placing it in the middle of the road on the yellow line the next morning. Some have even claimed that the ghost boy pushed them away from the bridge when they stood too close to its edge. Others have said they have seen the face of the young boy reflected back at them in the still, coin-filled water.

They say if you sit on the bridge you can summon the ghost boy by throwing a coin into the water below. He will either toss the coin back onto the bridge or place it back on the road the next morning.

Note: There are two bridges on Clinton Road and both are somewhat near Dead Man’s Curve. You’ll see remains of coins off both bridges and the exact location is a bit of a controversy. Most people flock to the bridge closest to Dead Man’s Curve which may be the most likely place, but there is another bridge a few miles south of Dead Man’s Curve is where you’ll see a waterfall. 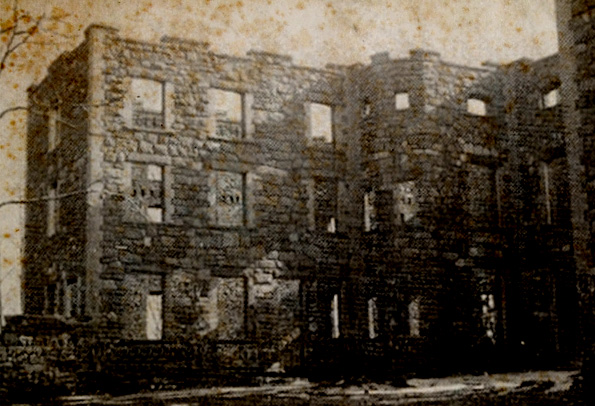 Tucked back into the woods, not far from the road, lies the ruins of what used to be a grand three-story stone and wood structure named The Cross Castle, named after its builder, Richard Cross. Cross built the large estate for himself and his family in 1905 and lived there until his death in 1917. His family then sold the property to the City of Newark in 1919. Sometime later, a fire ripped through the abandoned settlement, leaving only the stone structure behind. In 1988, the building was demolished but not before it had become a haven for Satanist ceremonies and KKK meetings. Even in the age the castle was built, the surrounding woods were thought to be evil and full of witches and bad spirits. Very few were willing to enter the woods, and even fewer would ever step into them at night. People who have braved the woods at night have heard strange chanting and manic laughter. Some have had seizures for unexplainable reasons and found animal sacrifices littered everywhere. Some have even had the unpleasant experience of bearing witness to a KKK gathering near the ruins.

The Furnace of Clinton Road

Yet another strange Clinton Road structure nestled against the trees, slowly gathering moss and foliage, is The Furnace, an 18th-century iron smelter. It has also been nicknamed “The Druidic Temple” since legend says local Druids would practice their rituals there although it’s really known as Clinton Furnace according to the Register of Historic Places. It is said that horrible things will come to pass to intruders that enter the stone structure unannounced or at an inopportune time. The smelter is now fenced off to prevent trespassers from entering the crumbling structure and, considering the tales told about the place, it may be for the best.

Not every horrifying tale about Clinton Road is supernatural. In May 1983, a cyclist noticed a large vulture picking at something in the woods close to the road. Upon further inspection, the cyclist discovered a human corpse. Following an autopsy, it was concluded that the man died due to foul play but strangely did not die as recently as his body would suggest. Due to the presence of ice crystals in the veins of the dead man, it was determined that the man had died several days before, but the killer had frozen him to make the date of death seem more recent. This method is how Richard Kuklinski, a hitman for the mob for most of his adult life, got the name, Iceman. The dead man was identified as Daniel Deppner, a business associate of Kuklinski and a known associate of the mob in nearby Rockland County, New York. A three-year investigation finally lead to the arrest of the New Jersey local, Iceman Kuklinski. He confessed to being the killer and made bold claims that he had killed hundreds of men throughout his life. The Iceman died in prison in October of 2005.

A ghost boy, Dead Man’s Curve, the Iceman’s burial ground, a druid temple, satanic rituals, KKK rallies, animal sacrifices, and more. Is it a coincidence that so many bizarre events transpire on this road, or is there a reason so much evil is attracted to Clinton Road and its parts? The coincidences seem to have become patterns. Once owned by a wealthy man and used as a private residence, Cedar Grove Inn is now a hotel that is a popular place for weddings. Read more… 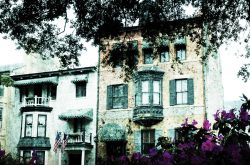 Looking for a smaller, more relaxed place to explore? Savannah, Georgia is a hidden gem right near the Atlantic Coast that is most certainly every bit as… Read more…