There is something gorgeous, majestic and even awe-inspiring about a historic lighthouse. Once common along lakes and oceans across the country, these once beautiful buildings keep disappearing each year. That might be why the Heceta Head Lighthouse is so popular. This former lighthouse is now a bed and breakfast that is open to the public. You can spend hours playing in the on-site interactive center to learn more about the region, and you’ll definitely enjoy the gorgeous views right outside your window. If you’re lucky, you may even encounter a restless spirit or too. Many believe that this historic lighthouse is one of the most haunted places in Oregon.

The most common ghost story told about the lighthouse surrounds a spirit known as the Gray Lady. Also known as Rue, the lady supposedly once lived in the lighthouse during its early years. Local legend says that she had a daughter who died unexpectedly at a young age. Guests claim that they can hear her footsteps walking around on upper floors and hear the sounds of her rattling cabinet doors. A few construction workers tasked with helping renovate the old property even claim that she caused the fire alarms to go off and moved their supplies.

Stories about the Heceta Head Lighthouse first popped up during the 1950s. Former residents claimed that they experienced a host of unusual things while living there. One recalls the smoke detector going off in the middle of the night. Even after they took out the battery, the alarm continued to shriek throughout the night. Guests of the bed and breakfast claimed that they had problems with doors locking for unexplained reasons and closet doors slamming shut when no one else was around.

Rue earned her nickname after one guest spotted a smoky apparition standing in an upstairs minute. The smoke swirled around the window, took the form of a female figure and became a swirl of smoke again in the span of just a few seconds. Others reported seeing similar figures and spotting a female figure swathed in gray in and around the lighthouse. One bridal party even reported seeing a misty gray smoke surround them and gently lift the bride’s veil before disappearing.

Though no one knows the story behind the Gray Lady or where she came from, it’s clear that this female spirit has no plans to go anywhere and that she has a fondness for the Heceta Head Lighthouse. 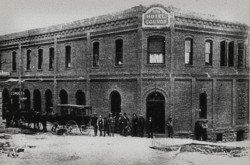 This hotel has a few hauntings according to both guests and staff. In one of the rooms closest to the main desk, a guest committed suicide. Read more…