Among one of the many secondary battle sites to the Civil War is the city of Chattanooga, Tennessee. The Battle of Chattanooga in November 1863 was a crucial step forward for the Union forces to gain a foothold in the Deep South as the battles raged eastward from Missionary Ridge up to the famous Lookout Mountain. The Union was led by William Tecumseh Sherman, and the Confederates were headed by Braxton Bragg. When the two-day battle finished, over twelve thousand men lay dead. In a supernatural twist, it is not the Civil War battle sites that reputed to be haunted, instead, it is the University of Tennessee at Chattanooga that is said to hold all the ghosts.

Is the University of Tennessee at Chattanooga Haunted?

Founded back in 1886, the University of Tennessee at Chattanooga, or UTC, was initially called Chattanooga University and then University of Chattanooga before being accepted into the University of Tennessee system by 1969. Early heavy enrollments really made the university thrive since its inception, as each year the school branched out further and further into the downtown area to acquire more buildings to meet the high student demand. As with any university, there are always stories about the macabre or supernatural that seem to break through and become legend and UTC is certainly no exception.

Hooper Hall holds more administration offices than it ever did classrooms, except for a lone science lab. Sometime in January of 1924, a grounds manager named John Hocking suffered a personal tragedy as his wife and child died in a house fire. Tormented with grief, Hocking went into the science lab and committed suicide via asphyxiation from the chemicals kept in the lab. Over the years, more administration offices crept up in the building and staff have reported unusual activity. Doors opening or slamming with nobody there, heavy fast footsteps on the antiquated tile floor. Students report feeling watched by an unseen presence that seems to bring a chill with it.

Bizarre enough is that the dean’s office is located in the same building. His office staff have reported that late one night after a meeting, an unusual and loud cuckoo clock sound would go off behind his locked office door. Informing the dean about clock going off in jest one day, he confessed to his staff that his office in fact didn’t have a cuckoo clock or any other such device that would make a sound.

Patten Chapel and the Woman in White

Nearly adjacent to Hooper Hall is a building called Patten Chapel. Naturally, it holds within it a sizable chapel for worship services and has been known to hold weddings and funerals for those who weren’t even students at all, due to its antiquated southern charm. Despite being an on-campus church, the Patten Chapel is haunted by the spirit of a woman dressed in white. She has been seen in both the daytime as well as night time, drifting for an instant by stunned students and agog faculty members. The look of her dress is thought to be that of a nurse and some have speculated her to have been a Civil War nurse tending to the city’s many wounded before suffering death herself. Of course doors slam and voices whisper, but the most disturbing is the eerie organ music in the chapel that has been played in the dead of night with nobody manning the organ at all.

Down campus on its edge is an actual graveyard simply called Confederate Cemetery. It was erected during the Civil War era and has the body of soldiers as well as slaves in its ground. Near this edge stands Brock Hall. This four-story campus cornerstone wasn’t always a college landmark building. On the same grounds decades before, the area served as a local jail for Confederate soldiers. Executions were also said to have taken place on the very spot as well until the troops in the area eventually moved out. Decades later when the university was constructed, Brock Hall was erected on the very site in which all this occurred. Incidentally enough, the university’s morgue and medical college were also housed in this building.

Over the years, both students and faculty alike have reported a wide range of paranormal activity. Longtime professor of Spanish, Dr. Roberto Rojas was particularly attuned to what was occurring. He had been known to speak about leaving his office to get a quick coffee across the street at the campus food court, only to return and his papers and books in his office to have been tossed about in a flurry. Rather than straighten things, he also spoke of such piles being mysteriously and meticulously being put back together while he was in a neighboring room without anyone entering or making a sound at all. Extremely cold air has permeated the many floors of the building even during sizzling hot summer semesters before spiking back up without any explanation. Despite the cold hair and activity, some students have even seen shadow figures that have been known to be spotted on the building’s stairwell. Are these figures the disembodied spirits of the executed Civil War soldiers who once stood there long ago?

Today, unlike other universities and places of higher learning, UTC has not tried to ignore or shut down any talk of the paranormal on its campus. In fact, it has rather embraced it during the Halloween season and has even held an overnight ghost hunt watch on occasion to document any paranormal activity. If you’re looking to scare yourself to sleep at a haunted bed and breakfast, then River’s Inn Bed and Breakfast in Antonito, CO, might be right up… Read more… The Haunted Doherty Hotel Hotel operators downplay any activity in the hotel, but it’s been investigated a few times by paranormal researchers. Read more… 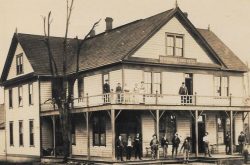 Say the word Georgetown and many paranormal enthusiasts and horror hounds are quick to respond with “where The Exorcist film took place. Read more…

Verify ownership of
University of Tennessee at Chattanooga