The La Fonda Hotel is a great location for ghost hunting. The original structure stood there more than 400 years ago. An apparition believed to be Judge John P. Slough has been seen numerous times. When one of the hotel staff investigated mysterious footsteps, the apparition resembling Judge Slough walked into the stairwell and vanished.

The ghost of a murdered bride by a jilted suitor has been seen near the elevators, in the lobby, and basement. The spirit of a cowboy is seen at the hotel bar, and a housekeeper saw a body in a bed in a room that was vacant. When she pulled back the covers, no one was there. If you stay at the La Fonda, you may not want to turn your bedroom light off. 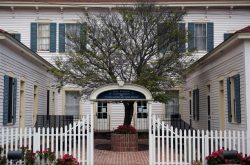 It is hard to imagine that the Civil War reached far and away from the battleground states in the Deep South, all the way to California. Read more…