This bed and breakfast is considered one of the most haunted locations in Washington. It’s been featured in a documentary called Montgomery House: The Perfect Haunting. For years, the bed and breakfast was haunted by solid apparitions as well as voices. The house was built on a location that used to house an entire Native American tribe that died when the settlers came to America. After the filming, the owners of the bed and breakfast moved and sold the house. It’s a private home now. 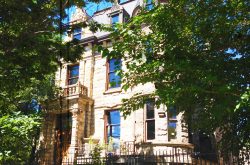 The image of castles bring up supremely dark, tall, and gothic stone structures that are firmly entrenched in the mountainsides of an Eastern European area like the… Read more…