It all started as a simple Hayride. Chris and Linda Michaels were married in May of 1987 and by October of that year, the twisted side of Chris began to surface. His idea of a hayride for friends and family that Halloween would eventually lead to what we have today, Nightmares Haunted House. Which by the way, happens to be the highest rated haunted house in four states.HHawards15

Starting at a farm where Chris grew up near Cave Springs, the hayride would travel to Osage Creek where they would have a bon fire and roast marshmallows and hot dogs. The turnout was good and the hayride evolved each year adding scary stories and simple scares. A cousin on a horse dressed as a confederate soldier, an uncle with his head through a hot dog table were just a few of the early scares. Continuing to grow his passion to scare people, Chris added friends to hide along the route and in a cemetery to scare the hayride passengers on the way to the bonfire. In 1994, the scares were ramped up with the addition of Randy Gaudian and he has been a scare partner ever since.

As the years went on, the weather proved to be occasionally uncooperative so the Hayride became a haunted house set up at Chris and Linda’s home in Rogers. Now the Michaels family with Randy and friends ramped things up for all who dare to visit and visit they did. One room became too small and soon the garage and then the back yard were dedicated to the Haunted House. Popularity grew and available space didn’t so it was time for another move, this time to an unused part of the Kozy Heat warehouse.

With this larger space, Chris and Randy let their creativity run amuck. Donations were made to support the bonfire activities and the end of the night. More growth and more visitors quickly forced the Haunted House to move to the larger metal warehouse on the grounds operating only one weekend at Halloween. Averaging 200 to 300 visitors that weekend became very hard to handle for this small group of scare tactician’s.

12208550_10153328127752648_4476967102254604211_nIn 2003, the Haunted House partnered with the Bentonville Breakfast Lions Club and began a new era that would take this small operation to the big time. Lions Terry Franklin, Tom Gray and Ron Guadian were instrumental in this merger and continue to play key roles today. Ron funded the construction of a new building on the grounds that are today the location of Nightmares Haunted House. The first year Ron would drive the visitors to the Haunted House from Kozy Heat in a truck. The second year, Chris and Randy had the idea to incorporate a scary bus ride complete with a movie playing and a crazy bus driver that made the ride feel like a roller coaster.

The bus was a key attraction, along with a great Haunted House and the operation took off. The Lions Club handled ticket sales and concessions and put all the profits back into the community to charitable organizations in need. The actors are mostly high school kids donating their time. Over the last several years, Chris and Randy have brought on new partners who bring addition creativity and resources that have contributed to record breaking visitor counts each year. In 2015, over 13,000 people visited Nightmares Haunted House thanks to the efforts of our staff. 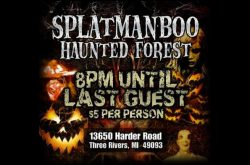 SplatmanBOO Haunted Forest in Three Rivers, MI SplatmanBOO is a haunted forest and you should prepare to run a little and scream a lot! One night the… Read more… 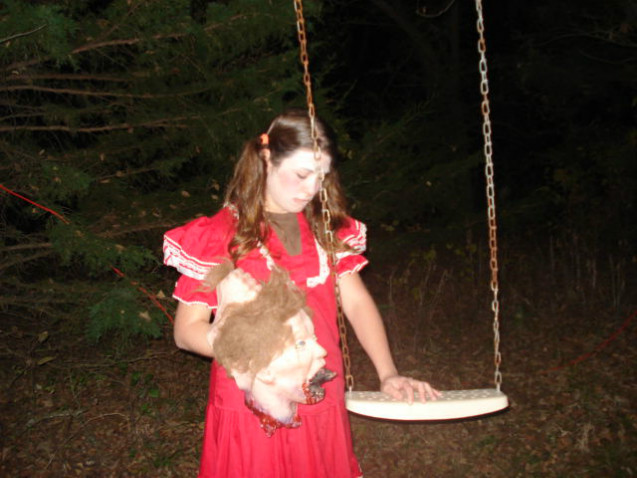 If it takes a little more than gory props and latex masks to frighten you, try the outdoors, where the light of bonfires cast eerie shadows. Read more…