Located where the prairie meets the Rocky Mountains in Casper, WY, the Ivy House Inn has a haunted history that dates back to Mr. and Mrs. White, its original owners – and their two Siamese cats. Mrs. White, who died in 1995 at the age of 93, apparently didn’t like people who smoke or drank, so she’d make post-death appearances to scare them off.

There have also been reports of mysterious happenings during renovations to the inn, Mrs. White’s cats running around and purring on the edge of beds, and a ghostly man in a black hat who set off car alarms in the parking lot. Sold in 2009, the inn is now a self-help center. The Lodge on Lake Lure 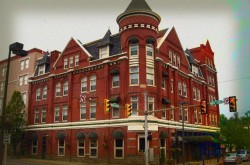 The Haunted Blennerhassett Hotel in Parkersburg, West Virginia Old-world charm and a ghostly presence are what guests experience at the Blennerhassett. Read more…