Paranormal Penitentiary is a haunted attraction located in Mansfield, Ohio at the Ohio State Reformatory, film site of many movies such as The Shawshank Redemption, Starring Morgan Freeman and Tim Robbins, Air Force One starring Harrison Ford, and Tango and Cash Starring Sylvester Stallone and Kurt Russel, music videos for Godsmack and Lil Wayne, Television shows such as Ghost Hunters, 101 Things to Do Before You Die, Scariest Places on Earth, and Ghost Adventures as well as many events throughout the year….but in the fall of 2016….it will take on its scariest form yet….PARANORMAL PENITENTIARY!! Robert Kurtzman and his sick and twisted team of artists will invade The Ohio State Reformatory and put their experience in horror movie making to work inside the walls of one of the most haunted places on earth.
Kurtzman is known as the “K” in KNB EFX, the iconic Hollywood effects trio of Kurtzman, Greg Nicotero and Howard Berger. He has worked on a plethora of films dating back to the 1980s, including numerous movies in the Nightmare on Elm Street series, Misery, Pulp Fiction, From Dusk Till Dawn, Scream, Army of Darkness, Thirteen Ghosts, Austin Powers in Goldmember and loads more. In total, he has been involved with more than 400 flicks — six of which he’s directed, including 1997’s cult horror favorite, Wishmaster. Come and see all of this horror come to life at The Ohio State Reformatory in Mansfield, Ohio. The Slayers of the Damned will be waiting!!
Halloween 2016 is going to be one to never forget! 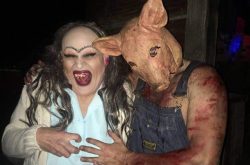 Every Friday & Saturday the final weekend in September through Halloween night. About   The McCall family owned this land for centuries. They farmed the land & raised livestock for their butcher shop. Read more…