It was the late 90’s in Asheville, North Carolina and the local haunted house scene was slowly dying.  With the VA Hospital no longer capable of allowing people to enter its doors it was time for a change…

Pinhead started making appearances at local haunted houses in 1995.  By 1997 Pinhead gathered a few of his closest friends and opened Pinhead’s Graveyard located at the Old Cowboy’s Nightlife in Oteen.  It was the very first year of Pinhead’s Graveyard and the last year that it was held indoors.  Some of you will remember meeting Jason Voorhees with raw meat, Pinhead’s strobe light room and chains slashing on the floor, Michael Myers Hallway and the old wooden bar in the building hosting some of Pinhead’s friends.

In 1998 Pinhead started to change things around and bring the first Outdoor Haunted House to Western North Carolina.  The search was on to find a scary remote location for the trail…and he did just that: the infamous Azalea Road in Oteen.  This road was a dark, windy, and desolate road that was plagued by tragedy.  Anyone who went through Pinhead’s Graveyard on Azalea Road remembers it as a terrifying part of their childhood.  Michael Myers was angry and waiting for you as you entered.  Scream was next and came rushing out of the darkness.  Pinhead had warnings of entering the graveyard while his Inmate dug fresh graves for victims.  Freddy Krueger and his fire was next followed by a dark walk to Crystal Lake where Jason Voorhees came out of the cold bloody water.  Finally, Leatherface would find your and with his chainsaw would chase you to your car.  The first few years on Azalea Road were very interesting because locals looking for the Graveyard would not want to pull into the dirt driveway leading to the parking lot.  The legend of Pinhead’s Graveyard started to spread and each year more and more people starting risking their well being just to see if they could make it out alive.  With the expansion of Azalea Road and the community efforts to make it a safe place again, Pinhead left after the fall of 2001 and was in search of a new place to call home….

In 2002 Pinhead’s Graveyard found a dark cornfield in Arden.  As much as people believe cornfields are a great place for a haunted house, they simply are not.  As October passed and more and more people came through the graveyard, the path became wider and wider.  As people would get scared they would run away from Pinhead and his friends and the corn kept getting knocked down.  It was a good year but definitely time to move on after the season had finished…

In 2003 Pinhead found a local movie studio lot in East Asheville and the trail once again was back in the woods!  There were several firsts for Pinhead’s Graveyard this year including our first segment on News 13 and also the first sightings of Otis in the Graveyard.  Pinhead had all of his closest friends with him including Michael, Jason, Freddy, Scream & Leatherface!  The movie lot was a nice getaway from the cornfield, but Pinhead was still in search of a more permanent place to call home…

In 2004 Pinhead found a dead end road and endless woods in West Asheville.  The road was Montgomery Street located behind the Waffle House on Smokey Park Highway.  These woods would start to form the fan base that we have today.  During these years Tony Kiss (Entertainment Editor at the Asheville Citizen-Times Newspaper) filmed two videos and also arranged two photo shoots at the graveyard.  We also were contacted by local paranormal expert Joshua P. Warren (Author of Haunted Asheville & TV/Radio Personality) and began our yearly tradition of appearing on his radio show Speaking Of Strange.  Several stories came from this period including Leatherface & his chainsaw running a victim all the way to the Waffle House!  Pinhead’s Graveyard began to grow by leaps and bounds.  It was because of this that we outgrew those woods and started hunting for another place to call home….

In 2011 it was time to find a bigger place for Pinhead and his friends to call home.  Otis found a place only 10 minutes from the Waffle House in Candler on Asheville Highway.  By 2012 Pinhead’s Graveyard was ready to go to the next level.  With the path the longest it had ever been and the exposure growing more every year, it was time to become one of the Southeast’s Premiere Haunted Attractions.  2012 would bring our first Celebrity Appearance from R.A. Mihailoff, the horror icon that played Leatherface in the Texas Chainsaw Massacre 3 movie.  R.A. became such a great friend that he came back in 2013 starting what would be a yearly tradition at Pinhead’s Graveyard.  We did several media appearances including 93.3 The Rise Guys Morning Show with 750,000+ listeners, the 105.9 Mountain Morning Show with Carson & Sadie, a News 13 TV appearance, and WSPA’s Carolina Now TV show.  We were also contacted by Ford and hosted a Ford Hunger Drive to raise money & meals for people in need.  Tony Kiss (Entertainment Editor / Asheville Citizen-Times) filmed another video (and photo shoot) that had everyone in town talking!

From the Local Legend beginnings of Azalea Road, all the way to Asheville Highway, the success of Pinhead’s Graveyard is all because of you, the victims.  The people who come back year after year to see Pinhead and real life monsters in the flesh.  The past few years have been an exciting ride for Pinhead’s Graveyard and there is so much more that we have in store for you to make each year bigger and better.  Get ready for new Celebrity Appearances, additions to the trail, new media appearances and much much more!!
Once again, thank you to all of the loyal victims that come back year after year and bring their friends and families.  Remember what Pinhead says, “Don’t bother us or try to find us, or your Nightmare has just begun!”

Pinhead and his friends will see you again in October….. 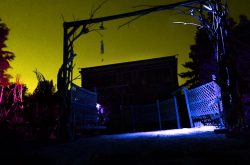 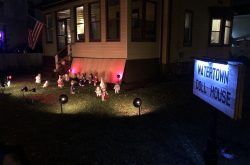 Visit us during the month of October. Best time to visit is after dark until midnight. A growing collection of discarded dolls. Read more… 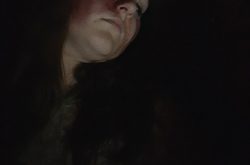 Terrifying Creations is an organization that works with the Seward High School to provide community service for graduating students, raises money for charitable organizations, while providing a scream… Read more…