Niagara Falls is one of the most popular tourist attractions in the world. While guests can stay in dozens of hotels, those looking to experience something a little paranormal should book a room at the Red Coach Inn.

Opened in 1923, the Tudor style bed and breakfast immediately became popular with those traveling to Niagara Falls for their honeymoons. They loved the views seen outside their windows, and those taking a break from honeymoon activities could head downstairs for a bite to eat at the elegant on-site restaurant. Though many hand unforgettable experiences at the hotel, at least one couple’s trip ended in disaster.

A young man and his new bride checked into the hotel and instantly headed upstairs to the room now called the Victoria Suite. A few hours later, guests found that the new husband took a heavy object and hit his new wife multiple times. The poor woman was dead by the time police arrived. Though no one is sure what happened that night, both the woman and man still haunt the room.

Nearly every guest who stays there feels cold spots throughout the room, and guests frequently complain that the temperature in the room is several degrees colder than the rest of hotels. They also hear restless footsteps pacing back and forth across the room, the sounds of a woman crying softly and creaking sounds. Though couples still travel to Niagara Falls for their honeymoons, many guests request a room other than the Victoria Suite when staying at the Red Coach Inn. 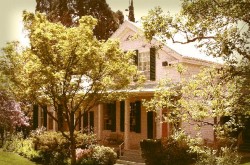 Haunted Captain Lord Mansion B&B in Kennebunkport, Maine Kennebunkport is known as a quaint coastal town, with a rich history dating back to the 1600s. Read more…