It is easy for people to become attached to places and as far as the Santa Maria Inn goes this can especially be true in the afterlife. Since being established nearly a century ago, frequent visitors of the inn have become permanent fixtures even after passing. The ghosts of acclaimed celebrities and previous guests from the early 20th century have been reported to make their presence known through macabre creaks and vibrations throughout the night. Some of the paranormal activity suggests a musically inclined spirit weaving itself into the building’s fabric, as a piano plays by itself. Also, many guests may feel cajoled to choose the stairs, as an elevator can be seen going up and down even though no buttons have been pushed, and no tenants stand in its shaft at least none that can be seen. Sometimes the presence of ghosts is more vivid, as visitors have reported coming face to face with strangers who dematerialize before their eyes.

The Santa Maria Inn is nestled in beautiful Santa Maria, California a town in between the illustriously sunny cities of Los Angeles and San Francisco. Built in 1917, the inn has a rich history which is punctuated by several famous visitors, including former Presidents and numerous celebrities. Although the inn has grown sizably since first being established (it began with a modest 24 rooms and now houses 164 rooms), the charm of the early 20th century remains as various fixtures in the inn, along with its macabre legacy of ghoulish experiences.

One of the most infamous stories of the inn involves acclaimed actor, Rudolph Valentino, who was a frequenter of the inn before his death in 1923. His ghost is said to be attached to room 210, where strange sounds and creaks reverberate throughout the night. Valentino’s alleged presence wasn’t the inn’s first experience with paranormal phenomena. After first opening its doors, the staff recalled strange occurrences and a male figure wandering the halls and famed gardens of the Santa Maria Inn. They named the ghost “Captain”, and he would sometimes even appear during the daytime, staring vacantly at the gardeners before dematerializing before their very eyes.

Various other occurrences have weaved their way into the fabric of the historical inn. In fact, the occurrences happen so frequently, staff hand out pamphlets to guests which include guest commentary. There are also a slew of visitors who have taken to comments sections for articles on the establishment to share the phenomena they became privy to during their stay. One woman recalled being awoken by the feeling of a man’s arms enveloping her as she slept. “He got out of bed once he knew I was awake,” she wrote of the experience. “Before he left, he said in my ear, ‘I drowned.'” Other experiences include those being awoken by various vibrations, loud knocking and shuffling during the night, and feelings of being watched.

As macabre as the aforementioned may sound, there has not been any indicators that the ghosts frequenting the Santa Maria Inn have any malicious intent toward visitors, so being spooked is definitely worth the trip. If anything, the ghosts seem to quite enjoy the company! One former guest recalled approaching what was known as a “haunted door” and after knocking “stepped back into a glass that was not there when I first approached the door. Weird…but fun. Must be a humorous, friendly ghost.” Indeed, when you visit the inn you may risk being awoken during the night (ghosts don’t really have a bedtime), but the experience and subsequent stories to share are well worth losing a few z’s. 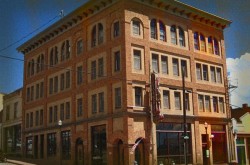 One of the deepest paranormal mysteries concerns attacks against the living. Read more…