Tucked away among the other blended houses of French Creole and Cajun style architecture is T’Frere’s Bed and Breakfast Inn of Lafayette, Louisiana. Amellie Comeaux and her family built their dream home in 1880, but her happiness wouldn’t last as she lost her husband and child from yellow fever. Lovelorn forever, Amelie tossed herself down the well on the property and died. The Catholic Church wouldn’t give her a proper burial due to her committing suicide, so she was never given a Christian burial.

Decades later, the home turned into a bed and breakfast that had not only frequent visitors but frequent reports of encountering Amelie’s ghost as well. Door knobs turn and doors open, often accompanied with a happy soft whistling noise. While considered lightly paranormal and unexplained the eeriest encounters are with Amelie’s spirit up close. She has been known to manifest and bitterly weep in a French Cajun dialect about being unable to rest and wanting to be reunited with her family.

Flash forward over 139 years later, and this wildly successful bed and breakfast is subject to her ghostly haunting, however, the owners now fully believe her spirit is a most gentle one. 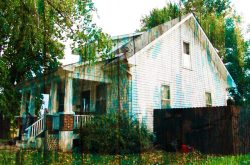 The Screaming House of Union, Missouri The Amityville Horror became infamous in the paranormal world for all the unbearable activities that the Lutz family was subjected to… Read more…