Baltimore doesn’t have the best reputation today, but the city once had an even worse reputation. Its proximity to the water lead to seamen and sailors arriving in the city and looking for a place to unwind. The Admiral Fell Inn now consists of several buildings once used by those sailors for gambling, finding women of the night and partaking in other illegal activities. Trip Advisor added the hotel to its list of the top 10 haunted hotels in the nation.

One of the more common stories told about the hotel only dates back to 2003. When the National Weather Service issued a hurricane warning for Baltimore, the owners decided to evacuate the hotel. A few workers remained behind to board the windows and take care of the hotel. A poor exhausted manager sat down to take a short break and felt the floor vibrating beneath him. He then heard loud music blaring from the second floor, footsteps bouncing and moving across the floor and people laughing and singing. When a second worker stopped in, he confirmed that he too heard the noises. It sounded like a large party happening right above them. As quickly as it started, the music and noises stopped.

Some of the noises heard in the hotel might date back to the days when the buildings were more boarding houses than hotels. The rough and tumble sailors staying in the hotel often enjoyed parties filled with alcohol, prostitutes and gambling. Those nefarious men definitely explain why so many guests reported seeing men in dirty white clothing wandering around the hotel buildings.

According to former guests, room 413 is the most haunted room in the hotel. A former guest checked in one night and didn’t come down for several days. By the time the front desk sent workers to the room, the man was long dead. Some claim it was natural causes, but others claim he was a victim of the mobsters littering Baltimore at the time. Housekeepers and maintenance workers feel so uncomfortable in the room that some refuse to even go inside. They feel an eerie cold chill sweep over them, see shadows moving from the corners of their eyes and feel a ghostly presence in the room. Though room 413 might be your best chance to see a ghost, you might experience other strange things at the Admiral Fell Inn. 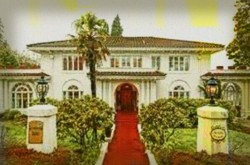 The Villa Bed and Breakfast 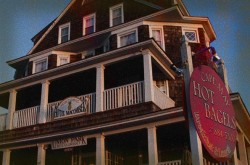