The Loews Don CeSar hotel in St. Petersburg, Florida is sometimes called the Pink Palace, but it is also known as the most haunted hotel in the Tampa Bay area. Stories say that the broken-hearted man who originally built the hotel, Thomas Rowe, has never left the premises although he died in 1940. In fact, some have even seen him wandering the gardens with the dark-haired beauty Lucinda, the Spanish opera singer Rowe loved and lost in Europe. Others report being greeted in the lobby by a smiling man in a Panama hat only to have the figure fade into nothingness. Rowe’s ghost has also been spotted on the fifth floor where he once lived.

Rowe and Lucinda fell in love when he was a student in London, but due to religious differences, Lucinda’s parents whisked her back home to Spain to put an end to the relationship. Every letter he wrote her was returned to him unopened by her parents. The only message from her he ever received was accompanied by the news of her untimely death. It was said that Lucinda had died of a broken heart, but she was able to send him a final message promising that she would wait for him forever.

A broken man himself, Rowe went to America and married a woman in Virginia, but he did not love her. Eventually, he moved to Florida alone and built the Don CeSar.

The hotel itself is a stunning piece of architecture, a striking pink fairy-tale confection, and it may have been in memory of the lost Lucinda’s homeland and career that Rowe chose the influence of Mediterranean and Moorish architecture and named the hotel after a Spanish character in the opera “Maritana.” As part of the hotel’s original design, Rowe also included a replica of the fountain at which he and Lucinda were supposed to meet for their elopement. In the hotel’s heyday, it hosted the famous and infamous including F. Scott Fitzgerald, President Franklin D. Roosevelt and Al Capone.

Thomas Rowe and his beloved Lucinda are not the only ghosts who haunt the hotel. Rowe died before making arrangements to leave the hotel to his staff as he intended, so it passed to his estranged wife who had little interest in its operations. The hotel failed and became a VA hospital from the 1940s until 1973 when it was turned back into a hotel. Sadly, the fountain had already been destroyed.

However, by the time the hotel reopened to guests, it had acquired some additional specters. The second and sixth floors are also said to be haunted, and some guests report seeing a nurse wandering the halls. She is also sometimes seen near the kitchens that were formerly a hospital morgue. Guests also say they have the unsettling feeling of being watched or that someone has come into the room with them. Lights blink on and off without explanation, and people open doors to repeated knocking to find no one on the other side – or no one who is alive.

Guests have also reported sightings of various other apparitions as well as irregular behavior from the elevator. One woman says she woke in the night to see a man standing at the foot of her bed. At the time, she thought someone had mistakenly wandered into her room, and the man went away. Only later did she learn that the hotel was haunted and realize that her late-night visitor had been a dead man.

However, of all the ghosts that haunt the Loews Don CeSar Hotel, it is the lovers Thomas Rowe and Lucinda that the hotel belongs to. Though cruelly separated in life, they will walk the halls of the Pink Palace together for eternity. 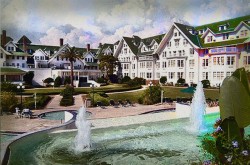