For those who like to seek out new experience and dabble in the world of haunted houses, there is no place better than Graceland Inn and Conference Center. Traveling to this historic Inn itself is an experience. When you arrive at the hillside Inn, you’ll immediately feel taken aback by the expansive grounds and landmark property. Several entities haunt the grounds. Guests have reported seeing an entity known as Grace, whose history is as mysterious as her appearances. A servant names Katie is destined to roam the halls fulfilling her chores from beyond. A senator named Henry Davis is also said to haunt some of the upper-scale rooms. There is also an unknown ghost who lurks in the basement. Rumor has it the servant was beaten to death and buried in the hotel. Situated on the Ohio River, the working class town of Brandenburg, Kentucky is an incredibly small place. Read more… 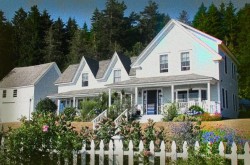