The RMS Queen Mary has been reported haunted ever since it was permanently docked in Long Beach, California on December 9th of 1968. The famously haunted ship sailed the Atlantic Ocean from the mid-30s to late-60s and has many reasons to be haunted.

During war time, the vessel had many servicemen and POWs who died during transport while during its time as a passenger ship, 49 crew and passengers are known to have passed on.

Shortly after the Queen Mary’s docking in Long Beach, the rumors of hauntings began. She would be listed in the top 10 most haunted places in America by Time in 2008.

The ghost ship was opened as a hotel in 1971, where guests have reported many paranormal happenings. From lights going on and off by themselves, water turning on and off, guests are awakened to heavy knocking on their doors in the middle of the night yet find no one in sight. Laughter is attributed to the ghosts of young children who died in the ship’s pool and a “lady in white” is famous for walking the halls of B deck.

There are many rooms reported to be haunted. Cabin B340 is said to be the “most haunted” room on the ship where the ghost of a passenger who died in this room is said to have permanently extended his stay. That ghost is said to be of Walter J Adamson, a 3rd class passenger, and his cause of death was listed as unknown. There are various reports that suggest foul play may have been involved in Walter’s death.

We suggest booking ahead to get a room in one of these areas.

If staying in this haunted ship’s hotel isn’t enough, during Halloween, the Queen Mary hosts the Dark Harbor Haunted Attraction. It may be hard to determine what is and isn’t part of the attraction. 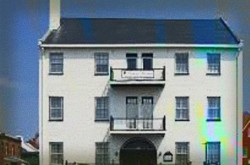 Verify ownership of
The Queen Mary