In a town made infamous for voodoo queens and Gothic vampires, it’s no wonder that New Orleans is known as one of the most haunted cities in the United States. Nestled deep in the dark heart of the French Quarter you will find none other than the haunted Hotel Monteleone, and creeping among the rooms of the hotel?s 13th floor is the ghost of a toddler boy named Maurice who died at the Monteleone after quickly developing a high fever while his visiting parents were away at the opera one night in the late 1800s.

According to legend, Maurice’s grief-stricken mother returned to the hotel many times over the years with the hopes of making contact with the spirit of her lost little boy. The toddler appeared to his mother while she was staying on the 13th floor (known as the 14th floor because the hotel bypassed the number 13), near where he had passed away.

Other guests have seen spirits walking by the foot of the bed or strolling the halls late at night, and some claim to have captured their ghostly encounters on camera. Even the International Society of Paranormal Research investigators made contact with several spirits while examining the hotel in 2003. Will you be next? 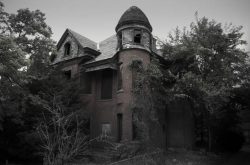 The Real Bailey Mansion This is the supposed “Bailey Mansion” that the photojournalist known by the pseudonym Seph Lawless shared in his book, ‘An American Horror Story. Read more…