HOUSE OF TORMENT IN CHICAGO!

House of Torment introduces a new brand of fear in Chicago this Halloween Season! One of the biggest, baddest haunted house experiences in the country is here to chill, thrill, and horrify you. This Hollywood­quality haunt features terrifying monsters and tormented souls from the underworld that are ready to horrify Chicago this fall.

The legendary House of Torment, a multi­layered psychological thriller, is more like a trip through a modern horror movie than just a haunted house ­ with detailed sets, iconic characters and chilling environments.

Make your way through this epic haunted house, don’t be surprised if the sets and characters begin to seem more real than your most vivid nightmares. But don’t let that stop you, an out of this world haunted house experience awaits you at House of Torment Haunted House Chicago!

“Once you walk into the House of Torment, there is no safe haven.” ­ Buzzfeed

Discovery Channel named House of Torment one of the “Top 13 Scariest Haunted Houses in the U.S.”

“…one of the largest and most terrifying Halloween attractions in the nation… House of Torment is a more­than­formidable challenge for even the bravest of heart.” ­ ABC News

This fall, House of Torment is ready to wow Chicago with cutting edge special effects and horrifyingly detailed scenes and sets for a thrilling haunted house experience. Featured at House of Torment Haunted House are two spine chilling attractions all at one location for one ticket price!

NIGHTMARE HIGH: As The Frenzy is taking over Chicago, the high school kids have discovered problems of their own. The local high school in Morton Grove has been overrun by a horde of undead teenagers. It is rumored that a zombie cheerleader with hair the color of blood now rules the halls, and she carries a machete to prove it. Detention takes on a whole new meaning at this “Nightmare High”. They say should you find yourself trapped in this schoolhouse of the damned, stay calm, act like the dead, and you may escape unnoticed. If you do, don’t stop for even a moment to look over your shoulder, because if she sees you, there may be some horrid lessons you’ll have to learn.

THE FRENZY: Visit the small town of Templeton and it’s abandoned 17th Century school, said to be filled with condemned souls. Hope that you don’t run into Hellen, the most vocal one of all. No one knows for sure how the condemned souls have come to be trapped, but one thing remains certain they want revenge. Are you brave enough to enter the school? Will you make it out or will you become one of The Abandoned! 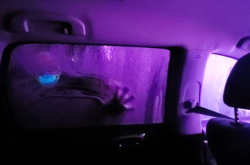