The Omni William Penn Hotel is often referred to as the “grandest hotel in the country.” The Omni William Penn is also referred to as one of the most haunted hotels in the United States with many reports of paranormal activity within its historic walls. With its 23 floors and nearly 1,600 guest rooms, the historic landmark casts a large shadow on the streets of downtown Pennsylvania. But not all of its history is grand; the hotel is marked with a bit of scandal, dating back to its earliest days when a traveling salesman was found dead in his hotel room.

In March 1922, Michael York, a lingerie salesman, was found dead of an apparent self-inflicted gunshot wound in his hotel room at the Omni Penn Hotel. The death became more mysterious when police recovered telegrams from within the hotel room that portrayed a series of bad whiskey deals that led to York’s life being threatened.

Police questioned York’s taxicab driver who claimed that York had been out late at a party on the evening of his demise and had shown the driver a handgun. York reportedly told the driver that he planned to “end it all” unless his circumstances changed dramatically that night.

Tragically, it was discovered that a woman had attempted to contact York on the night of his suicide. It is believed that the information she planned to report to York would have assuaged his fears and likely saved his life. According to the hotel operator, her call was connected to York’s room only minutes after his act was carried out.

While it is unclear on which floor the deed took place, there have been reports of strange sightings, sounds, and smells coming from the uppermost floors of the hotel.

Omni Hotel is said to house dozens of spirits, most of them occupying the 22nd and 23rd floors, which are largely uninhabited… by the living. Years ago, the two floors were converted and are now used for storage, but that hasn’t halted the reports of odd sounds, cool drafts, and a generally spooky feeling. One hotel guest reported a dream while staying in the hotel. Sarah had a vision of an elderly couple who entered her guest room carrying luggage. “The old lady dropped her luggage when she realized I was in “her bed,” she wrote. “She yelled at me that the bed was hers because she was murdered there.”

Several guests have experienced a sensation of being watched while wandering the halls of Omni Penn Hotel.

In July 1976, an argument broke out between two employees of the hotel. Nelson Cooper, 70, shot and killed Samuel Bankhead, 65. The two were lifelong friends who were working as dishwashers in the hotel’s banquet hall. It is common for guests to report hearing the sounds of two drunken, though friendly men chatting idly in the hallways outside of their hotel rooms. When one such report was investigated by hotel staff, the men could not be located.

If history had been written differently, the Omni William Penn Hotel may never have been built. Industrialist Henry Clay Frick provided much of the financial backing for the construction of the hotel, and in April 1912 his wife became ill. Had she not been under the weather, both she and Frick would have been under the sea along with the Titanic after it set off on its maiden voyage.

As it happened, Frick lived to fund the hotel, and it opened on March 11, 1916. The Omni Penn Hotel was designed by Benno Janssen and Franklin Abbott at a cost of nearly $6 million; its unique “E” shaped structure contains more than 1,600 guest rooms. When the hotel opened, it employed more than 800 staff including its own silversmith and locksmith, and fittingly, its very own butcher.

Omni Hotel has played host to several historical figures over its 101 years in operation, including John F. Kennedy and Bob Hope, who supposedly proposed to his wife Dolores at the location. According to Pittsburgh Magazine, however, the story was fabricated.

There is no denying the popularity of the Omni Hotel. The hotel recently underwent a multi-million dollar overhaul, making it the second largest hotel in the nation. Though guests may find themselves encountering a suicidal salesman or a drunken dishwasher among the hotel’s haunted hallways. 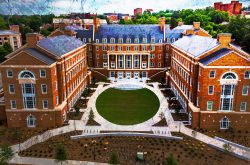 On the surface of Athens, Georgia is like any southern town. A simple population in a modest county that is known for southern charm through and through. Read more…