When the cast and crew of the hit television show Ghost Adventures arrived in Sauk Centre, Minnesota, they didn’t know what to expect. After checking out the Palmer House Hotel, the group of paranormal investigators declared the local historic landmark haunted. Zak and his crew are just a few of the guests who experienced things that went bump in the night at the hotel.

Built in 1901, the Palmer House Hotel sits right on top of another hotel. That first hotel was the victim of a fire that swept through the property and burned the brick structure to the ground. The new Palmer House Hotel was a large and elaborate building with three floors, brick walls to keep fires from spreading and state of the art amenities. At the time of its construction, it was the only building in the city with interior electric lights and full electricity.

A popular story surrounds a little boy who stayed in the hotel with his parents. Though no one can recall exactly how he died, it’s clear that he enjoyed his stay because he never left. The little boy makes appearances in the hallways on the second floor. Guests have also heard the sounds of his rubber ball bouncing and moving through the halls.

Haunted Rooms of the Palmer Hotel

If you truly want to experience something paranormal, make sure you stay in either room 11 or room 17, which former guests claim is the most haunted. One terrified young woman woke in the middle of the night to see a man standing at the foot of her bed and staring at her. By the time she roused her husband, who was in bed beside her, the man she saw in her room was gone. Others claimed to see a tall and skinny man dressed in old-fashioned clothing standing in one of these rooms. He almost always appears in the middle of the night and disappears as quickly as he appeared.

There are also stories told about an elegant looking woman with a red turban perched on her head. At least one employee recalls seeing her walk out of the bar and disappear in front of his eyes. Others attempted to approach the woman and witnessed her vanish without a trace. Locals and hotel staff believe this woman and some of the other resident ghosts date back to the time of the former hotel and now linger in the Palmer House Hotel, which stands in its place. Until 1998, this hotel was like any other. Around Halloween night that year, it’s said that a businessman killed himself on the 15th floor. Read more… 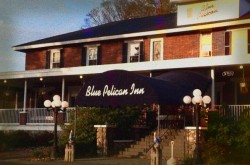