Is the Renaissance Mayflower Hotel Haunted?

Anyone who wants to stay in a haunted hotel with a touch of history and class may want to try the Renaissance Mayflower Hotel in Washington, DC. When the hotel opened its doors in 1925, it was called the Grande Dame of Washington. It had almost as much gold in its decor as the Library of Congress. Many U. S. Presidents have called the Mayflower home. Harry Truman stayed in the hotel during his first 90 days of presidency.

The haunting that most people talk about at the Renaissance Mayflower Hotel is the incident that happens January 20th each year. Calvin Coolidge was due to hold his inaugural ball at the hotel when his son died due to blood poisoning from an infection. The president, mourning the loss of his son, didn’t attend his inaugural ball.

Traditionally, at 10:00 p. m., honored guests are announced during the ball. At 10:15 p. m., the president is announced. Each year at the Mayflower, the lights in the ballroom flicker then dim. The elevator stops running at 10:00 on the upper floors. When the time hits exactly 10:15 p. m., the elevator descends to the bottom floor. This occurs as it would have had Coolidge attended his inaugural ball. Some years, hors d’oeuvres and wine can be found on the balcony. 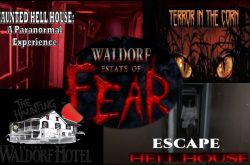 Haunting Hours are Every Friday and Saturday in October 7pm-11pm

The Haunting at the Waldorf Hotel -an indoor walk thru that will have you crying for your Mommy! Terror in the Corn -an outdoor walking trail that… Read more… 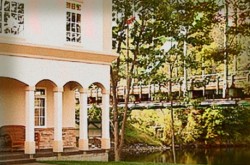