The Skinwalker Ranch in Utah

Skinwalker Ranch is said to be a hotbed of paranormal activity and strange happenings. For over 50 years, reports of UFO sightings, glowing orbs, poltergeists, animal mutilations, crop circles, and even Sasquatch have come to light. Frightening events are just known to happen in this area. Over 100 cattle mutilations and disappearances have been investigated by Colm Kelleher and Goerge Knapp over the years.

The Hunt for Skinwalker Film

George Knapp and Colm Kelleher collaborated to turn their book of the same name to a film based on the ranch and its supernatural activities. The film studies the surrounding areas which are apparently tightly secured by what may be military controlled areas which appear to have Area-51 level security. Could something nefarious from nearby properties be contributing to the UFO sightings and paranormal activity?

Where is the Skinwalker Ranch?

Stories from the Skinwalker Ranch

Many stories have surfaced over the last 50 years. The property is on the Ute Indian Reservation which adds to the lore. The name and many legends have passed down from the Ute and surrounding tribes.

The Haunt at Camp Liberty
Nightmares on Elk Street 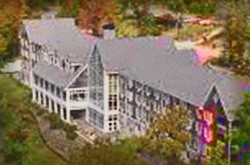