Home » Haunted News » Tarrare: The Insatiable Man Who Ate Everything!

Tarrare: The Insatiable Man Who Ate Everything!

Published by FrightFind On December 9, 2017 Leave a response 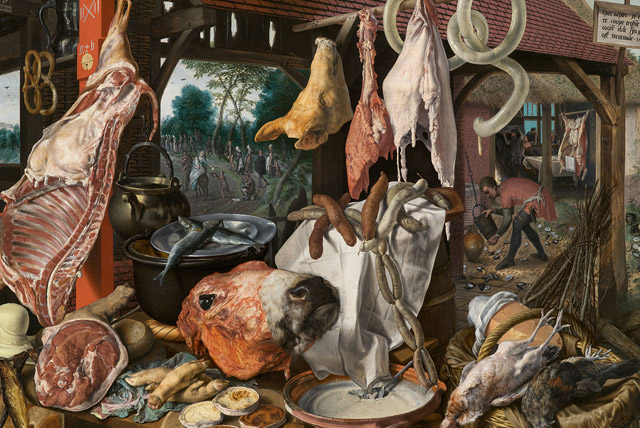 Rarely is it possible to find a truly creepy, truly mysterious, and truly…well, just true, horror story from history. Discounting ax-murdering and serial killing Borden-Gein type stories, which terrify us because of the violence associated, when was the last time you read about a truly bizarre moment in history that still remains unsolved? And when was the last time you learned something like that from a medical journal?

Enter the tale of Tarrare, a French street performer and soldier born in Lyons, France. Tarrare’s actual date of birth and birth name is unrecorded, but his year of birth is suspected to be around 1772 according to medical records of Dr. Courville, surgeon to the 9th Hussar Regiment, and George Didier, Baron Percy, surgeon-in-chief and author of the medical paper Journal De Medecine, Chirurgie, Pharmacie, etc. 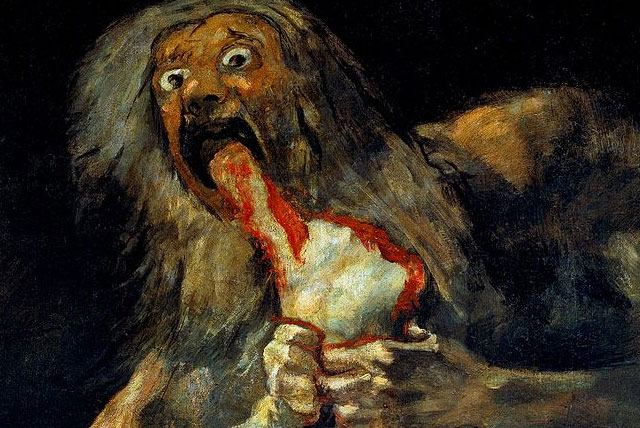 Tarrare became a medical anomaly in the 1700’s due to his seemingly endless appetite. Forced from his home as a teenager due to the veracity of his cravings, he roamed the streets with a myriad of society’s unwanted:  thieves, prostitutes, and traveling charlatans. He earned work as a street performer using his ability to swallow almost anything whole, including whole apples, stones, and sometimes… live animals.

At 17, he was described as being average height and roughly only 100 lbs. According to the 2006 book “Freaks: The Pig-Faced Lady of Manchester Square & Other Medical Marvels” by Dr. Jan Bondeson, Tarrare was said to have unusually soft, thin hair, with an “abnormally wide mouth” and stained, decayed teeth behind thin, nearly invisible lips. The skin on his cheeks supposedly hung loosely, but if stretched to their full potential, could hold up to a dozen apples. If the young man went without eating any significant length of time, his abdominal skin would hang and droop loosely to the point of being able to wrap around his waist.

Tarrare was said to sweat profusely and suffer from an increased body temperature, as well as an incredibly foul body odor. His odor only increased after he had eaten a full meal, and it was noted that after becoming full, his eyes would become severely bloodshot, veins would become apparent on his cheeks, and his jaws would repeatedly “make swallowing motions”. 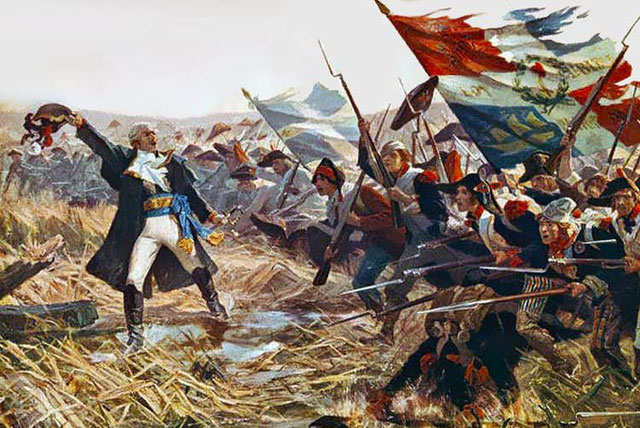 Tarrare’s affliction sounds like the first documented case of a wendigo (a malevolent, cannibalistic, supernatural being), Dr. Bondeson posthumously speculates that Tarrare suffered from a damaged amygdala that may have led to the very rare condition, polyphagia, or “excessive hunger or increased appetite”. Other speculations include hyperthyroidism, which can cause “extreme appetite, weight loss, profuse sweating, and fine hair”.

Despite his perpetual hunger and disturbing meal choices (raw snake meat was considered among his favorite dishes), doctors at the time noted no major apparent health concerns. Well, besides chronic diarrhea, which was described in The London Medical and Physical Journal as “fetid beyond all conception.”  Mentally, Tarrare was deemed fit, but was described as being apathetic and with “a complete lack of force and ideas.”

Apparently, none of this bugged the French government as he was welcomed into the French Revolutionary Army at the beginning of the War of the First Coalition. His days as a street performer had earned him quite the reputation and caught the attention of the French Army, who believed Tarrare could make an excellent spy using his ability to swallow items whole.

Of course, the 1700’s French rations proved to do little to satiate Tarrare’s hunger. After eating his own portions, bargaining with other soldiers for shares of their food, and scraping refuse bins for leftovers, Tarrare still found himself so near starvation that he was hospitalized.

His rations were increased to four times per day, but Tarrare still needed more. It was at this point that the above-mentioned surgeons, Dr. Courville and Baron Percy, began documenting (and experimenting with) Tarrare’s unusual appetite. 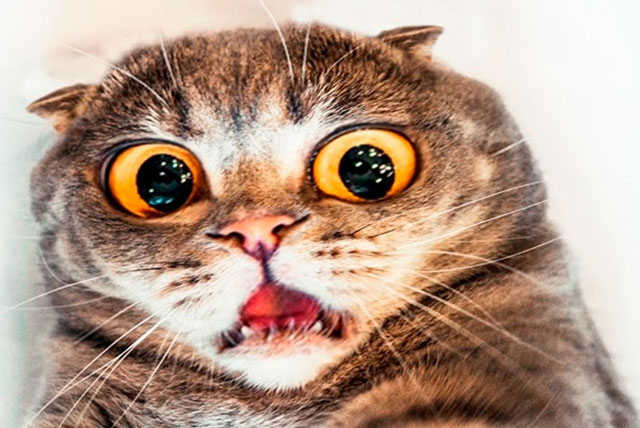 Doctor Percy once documented a time when Tarrare was allowed within the vicinity of 15 meals prepared for hospital staff. Tarrare quickly ate through the entire feast, consisting of two large meat pies, and around four gallons of milk. Percy described his stomach as looking inflated and compared it to a large balloon.

To test the limits of his capacity, Percy and staff began introducing non-food items to Tarrare. Squeamish readers beware; this next part is pretty disturbing. Maybe inspired by his past snake eating, street performing days, Percy decided for some ungodly reason that he would present Tarrare with a live cat. To eat.

Tarrare was witnessed ripping the cat’s abdomen open with his teeth, drinking its blood, and eating the entire cat, minus the bones, before coughing up the fur and skin.

Following the success of this experiment, the hospital gave Tarrare all manner of other living creatures, including lizards, eels, and puppies. All of which were devoured in a similar fashion as the cat. 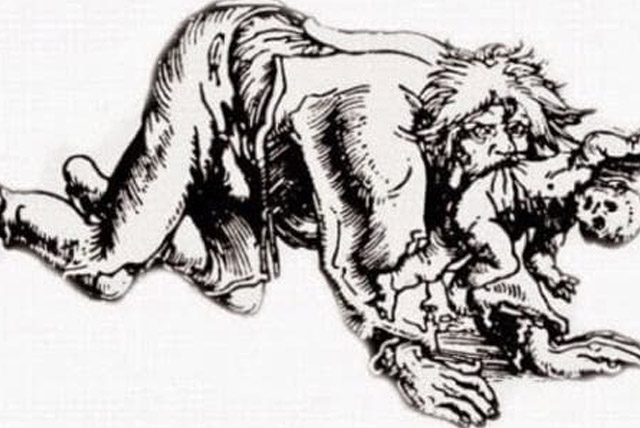 Did Tarrare eat a baby?

Following a failed military spy operation that resulted in a severe beating and near-lynching, Tarrare returned to Percy, begging him for assistance in finding a cure. Multiple “treatments” were implemented, including tobacco pills and laudanum, a potent narcotic that contains opium and morphine, and eventually just stuffing as many soft boiled eggs into Tarrare as they could to quell his appetite. None of these treatment methods worked.

The hospital staff was unable to keep his diet contained and Tarrare eventually began breaking out of the hospital to raid trash bins, search for dead and decaying animals on the street, and begging for scraps of raw meat from butcher shops. On the rare occasions the staff could keep him contained on hospital grounds, it proved even more troublesome. Tarrare was discovered on multiple occasions drinking blood from patients inside the hospital and eating the deceased he found in the hospital’s morgue.

Tarrare was actually chased from the hospital by hospital staff after it was suspected that he ate a 14-month old child that disappeared during his stay.

Four years after the incident, Percy was contacted by a hospital in Versailles who had news that a former patient of his needed assistance. It was Tarrare, who, apparently during his four-year hiatus, hadn’t had a significant change in diet. Tarrare told Percy he was worried he had ingested a gold fork that had become lodged in his stomach and was causing complications. Within a month, Tarrare began experiencing continuous diarrhea which would ultimately lead to his death.

Along with Tessier, the doctor presiding over Tarrare’s care in Versailles, Percy was curious as to the internal workings of such a medical anomaly. 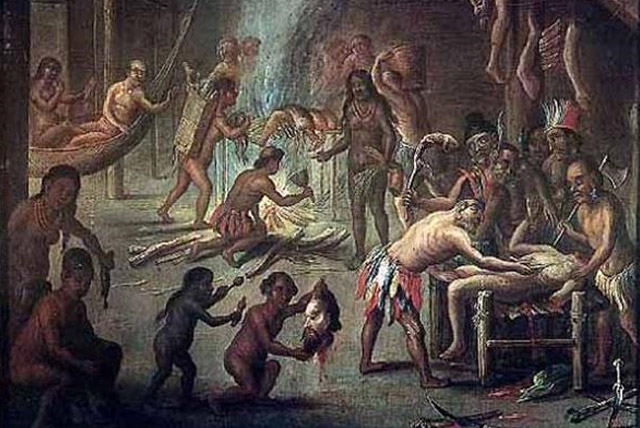 Upon completion of Tarrare’s autopsy, it was discovered that Tarrare’s esophagus was abnormally enlarged when his jaws were opened, offering surgeons a view down a large canal directly into an ulcer-ridden stomach. His body was noted as being filled with pus and infection and he appeared to have an enlarged gallbladder and liver. His cause of death was suspected to be tuberculosis.

A Wendigo is “supposedly” a mythical cannibal spirit that can appear with the characteristics of a human. They have an insatiable appetite and an intense craving for flesh, often human flesh. Tarrare’s appetite and appearance fit the bill.

Basil Johnson, an Ojibwe scholar from Ontario,  describes the Wendigo as gaunt to the point of emaciation, with desiccated skin pulled tightly over the bones. What little lips he had were tattered and bloody, and his complexion was ash grey. Giving off a strange and eerie odor of decomposition and decay of death and corruption.

This does start to sound like Tarrare. Could he have truly been a Wendigo? And Tarrare did drink the blood of animals and fellow patients, which is a trait of the Wendigo.

Some question if Tarrare was a real person as there is speculation on Tarrare’s real name and there is no recorded date of his birth. He was, however, enlisted in the French military and his affliction was indeed covered in medical journals dating back to 1804 by Baron Percy. The medical journals are the likeliest available proof of Tarrare’s existence. So yes, Tarrare was a real recorded person in history with the aforementioned afflictions. Was he a Wendigo? We’ll never know.

While still fairly unknown as a historical figure, the man simply called Tarrare still stuns medical professionals and scholars, and has been a topic of discussion in medical journals and newspapers since the 1800s, even appearing as recently as 2006.

With no currently living human displaying any of the same symptoms and behaviors as Tarrare, we may never know his actual affliction, which makes Tarrare one of the most fascinating and terrifying mysteries in history.

…or, you know, a wendigo, because we definitely shouldn’t rule that out.