It’s often said that ghosts haunt the place where they met their untimely demise when murder is involved. Dating to 1911, this Cheyenne hotel is said to be haunted by the groom of a jealous bride, his lover and the jilted bride herself. It all started with a recently wedded couple who decided to spend their honeymoon at this particular hotel.

As the story goes, the bride went in search of her new husband and found him at a nearby bar – in the company of another woman. The irate bride supposedly followed the pair out of the bar without being detected and offed both of them. Distraught over what she had just done, she returned to her hotel room and took her own life. All three spirits are said to still be in residence. 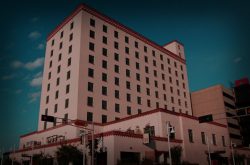 Haunted Hotel Andaluz Conrad Hilton was still in the early stages of his career when he built the Hilton Hotel in the 1930s in Albuquerque, New Mexico. Read more…