The Marshall House was established in 1851 in Georgia’s oldest city of Savannah. The Marshall House would endure the Civil War and a bout of Yellow Fever early in its history, which provided a grand setting for the hotel to latch onto its ghostly inhabitants. Today the Marshall House is one of the most haunted hotels in America with a ghoulish history that might leave a few in disbelief.

During the Civil War Era, The Marshall House functioned as a Union hospital. In 1864, a frigid winter struck and the doctors were presented with a frightening problem. The doctors would be unable to bury the myriad of amputated arms and legs in the frozen ground. Their solution was grotesque in that it had them concealing the human remains underneath the floorboards throughout what is now the hotel.

It wasn’t until 1999 when the hotel was restored that workers uncovered the Marshall House’s gruesome secret. While replacing the hotel’s floorboards, the workers uncovered human remains. Little did they know the discovery would date back to the Civil War. Historians soon learned that the remains were from the old hospital and they were properly removed and the hotel restored. The ghosts of the Civil War had come full circle and the doctor’s secrets revealed.

The remains were cleared, but many paranormal remnants are still attached to the hotel. Ghosts envelop parts of the haunted hotel and have appeared as apparitions to guests. Many unexplained noises resonate in the late hours of night and even smells of rotting flesh inexplicably accost the senses. It has been reported on numerous accounts that the ghost of an amputee soldier walks aimlessly through the lobby of the hotel with his missing arm in hand as he beseeches guests to find him a surgeon.

Many Ghosts of Savannah’s Haunted Hotel

It is also said that the ghost of a woman haunts the ladies’ restroom and a stall will lock by itself. Late author Joel Chandler Harris was also a frequent visitor of The Marshall House before his passing, and various accounts have noted that there are times when the clacking of a typewriter can be heard reverberating from the room he used to stay in.

One guest reported being unable to sleep due to macabre noises and smells. At one point, she recounts, there was even the feeling of being touched by a paranormal presence. “I always felt very uneasy and utterly creeped-out at night,” she stated. She goes on to say that she “heard strange noises in the hall late at night” and that she was very unnerved by her paranormal experiences. She went on to report that her husband’s sleep was interrupted by what he said sounded “like a child giggling in the sitting area,” but when he got up to turn on the light no one was there.

There are many ghosts and haunts in Savannah, Georgia as it is noted as a historically haunted city. Savannah is home to a variety of ghost tours, haunted hotels, and spooky stories and The Marshall House one of the more famous haunt experiences in the state. If you stay at the Marshall, check in to hear some of the previous guest’s haunted stories as the hotel collects many of the spectacular tales for story time.

Haunted Rooms in the Marshall House

What happened in Room 414? Are the ghosts of the Civil War finally at peace? Have all of the remains truly been discovered?

If you want the 4th floor, book in advance. Also, when planning your stay at The Marshall House try for a Thursday or a Sunday as the hotel puts on a history talk in the library discussing the Marshalls, history of the haunted building, and the many stories and experiences with ghosts over the years. It makes for a great addition to your spooky stay. 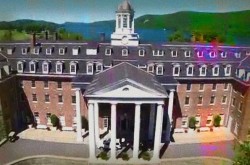 Verify ownership of
The Marshall House