The Enfield Haunting House from The Conjuring 2

Ed and Lorraine Warren were considered to be famed authorities when it came to diagnosis and remediation of paranormal situations. Their paranormal case files number in the thousands. Oftentimes they received hundreds of letters at a time from people needing help, only able to respond to the most severe. They were made globally famous when their investigation of a Rhode Island estate was made famous in The Conjuring movie.

In 1977, over three thousand miles away in the working-class town of Enfield, a borough of London, England, a mother, and her four children were suffering from a paranormal attack. The cries from help were so strong, the Warrens were convinced they had to take the case and soon found themselves in the most famous paranormal case in England. The documentation for the case is staggering and was made known to the world in the 2016 box office smash hit The Conjuring 2.

Where is the real Conjuring 2 house in Enfield, England? 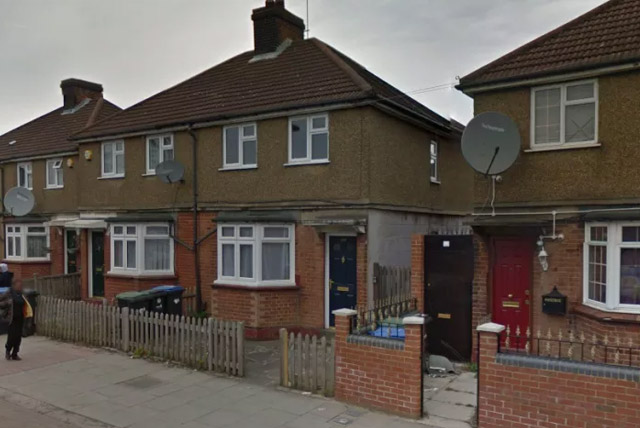 284 Green Street in the Enfield borough of London, England is the address of the still-standing council house. The house was rented by a working mother named Peggy Hodgson. She lived in the home with her four children: Margaret 13, Janet 11, Johnny ten, and Billy 7. The unassuming house was situated in the middle of Green Street, and prior to the Hodgson’s living there, no paranormal activity was documented.

Early one evening in 1977, the very first thing that was seen by the children in the home was a clothing chest that moved.  The drawers it housed began to open and close, banging back and forth. The noise scared them and startled their mother who came to see what all the commotion was about. Peggy personally saw the clothing chest move but was not intimidated and tried to push it back to its original place. Only the chest would not move at all. She remained silent as the terrified children told her of it moving on its own when suddenly the chest slid across the floor towards the bedroom door to block it.  Gathering her children up, Peggy took them downstairs where they often slept for the next eighteen months. 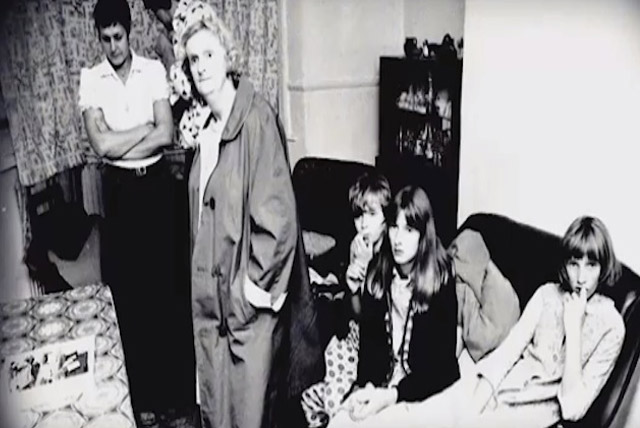 The activity was textbook poltergeist behavior, and admittedly years later, the Hodgson children had confessed to playing with a Ouija board prior to the clothing chest incident. Loud noises, objects being moved out of place, and levitations were common. There was no clock set by which the activity would occur as it was just as easy to happen in the daylight hours. The police constables were called due to the noise complaints from neighbors, and they themselves personally witnessed objects moving about the home.

With no visible crime committed or logical way to stop what was going on inside the house, the police walked away unable to assist. Next door neighbors to the Hodgson family, the Nottinghams were often a great source of refuge. After failed attempts by the police, Mrs. Nottingham personally called up a local paper, The Daily Mirror, to tell of the activity going on, in hopes that an article could be written. Reporters for the case visited the house and walked away solid believers in what was going on inside. To help the family, one of the reporters called the local Society for Psychical Research to come and help the desperate family.

The Growling and Maurice Grosse

The Society for Psychical Research was a group based out of London who investigated psychic and paranormal claims. One of their newest members was a man named Maurice Grosse. He was an inventor and businessman who after experiencing a personal tragedy in the death of his daughter, began to investigate the paranormal. Along with a local author and paranormal investigator named Guy Playfair, the two began to examine the purportedly haunted Enfield home.

Right away, the activity was upfront and frequent. The infamous clothing chest in the girl’s room began to move on its own with drawers opening and closing. The young children’s marbles would spin and roll before mysteriously floating through the air as if being carried. The coffee table in the living room where they slept levitated, spoons in the kitchen would fly off the counters at random, the iron frame in the hearth of the fireplace was torn to pieces, and constant loud bangs and footsteps permeated the home. At this stage, Grosse and Playfair knew they had a confirmed poltergeist haunting. The real terror began to set in with the growling from young Janet. 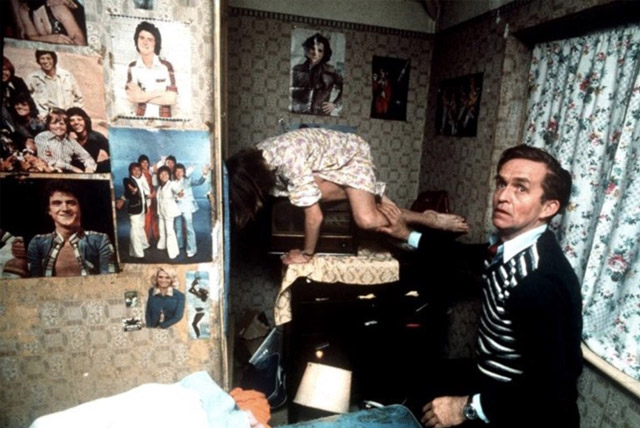 Even with all the activity that was going on, the children were on a constant stressful edge. Janet during this time seemed to suffer the most out of all the Hodgson children. She was becoming more and more detached, often with a blank expression and a feeling of which she would describe as, “being in a black forest”. In fact, she was physically attacked in the living room one day. Sitting near the curtains, they suddenly wrapped themselves around her neck and began strangling her in which it took several people to unravel the tightly wound noose.

One afternoon while being interviewed by Grosse and Playfair, Janet began to growl. Deep, unearthly sounding growls emitted from the young child. Shocked by the change, Grosse and Playfair began to take recordings of her many growls, when suddenly she began to speak. However, the voice she was speaking in was not her own. It was best compared to a much older, gravelly-voiced man. One of the more terrifying things spoken by young Janet was in the older man voice saying, “This is my home! And I resent you being here!”.

Naturally, there were detractors to the ever happening activity in the home. People who heard of Janet’s voice claimed it was merely a ventriloquist act. Grosse and Playfair personally put up several hundred British pounds as a reward for anyone who could duplicate the voice, with many trying and all failing. Janet’s voice was given the ultimate test with her mouth taped shut, and the old man’s voice was still heard. Shortly thereafter, the Warrens were called in to aid the investigation.

Ed and Lorraine arrived at the Enfield borough prepared to help at all cost. They, alongside Grosse and Playfair, began to document the paranormal activity that was going on inside the once quiet council home that was suddenly now getting all sorts of media attention. The nighttime was becoming the worst, as even though the children had slowly accepted sleeping in their bedrooms once again, there was still poltergeist activity going on, making sleep almost impossible. Janet was once again the center of attention. During one particular night, Janet levitated out of bed in front of investigators and one of the most authentic and compelling paranormal photographs was ever taken. 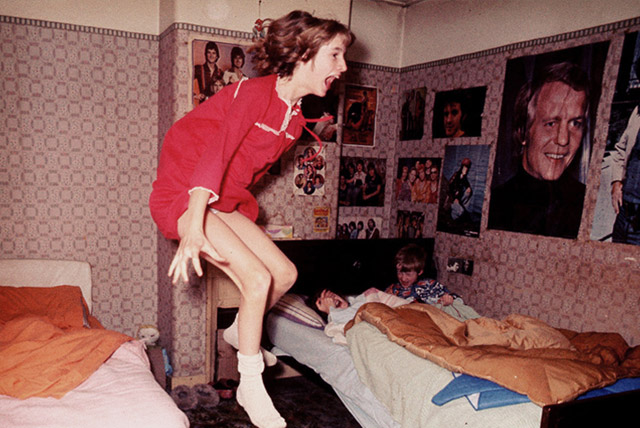 The Warrens alongside Grosse and Playfair conducted countless interviews with all the Hodgson family, neighbors, and referenced all the local resources they had at their disposal to try and diagnose what exactly was causing all the activity. It was Grosse who initially made the breakthrough with young Janet. Nearly eighteen months into the entire process, Grosse was able to question Janet as she spoke in the old man voice. It was with such questioning that the spirit speaking through Janet made its name known as Bill Wilkins.

Speaking as Bill, Janet spoke about him being there at home in his chair, when suddenly he went blind. He saw total darkness before dying of a violent hemorrhage. The facts were checked, and Bill Wilkins’s still living son, Terry, was able to indeed confirm exactly what Janet was saying about the death of his father. Shortly after the revelation of the name of the spirit, the activity in the home quietly tapered off into nothingness. After 18 wildly exhausting and terrifying months, the Enfield Haunting had officially stopped as mysteriously as it began.

Years After The Enfield Haunting

Soon after activity in the home had ceased, everyone had gone their own separate ways. The Warrens, of course, returned back to the United States where they continued to help others who were suffering from paranormal attacks. In terms of their cases, the Enfield Haunting is widely considered one of their “top three” investigations of all time. Maurice Grosse continued as a researcher of the paranormal as the Enfield Haunting had given his name a lot more credibility to it. Using his experience he was able to help many more people who were victims of hauntings before ultimately passing away in 2006.

Guy Playfair took his own experience there with Enfield and further wrote, published, and produced many articles on the subject of the paranormal. Playfair passed away in London in 2018. Peggy Hodgson maintained that everything experienced in the home was authentic before passing away due to a cancer-related illness in 2003, while her son Johnny passed away in 1981. The youngest, Billy, remains quiet on the haunting to this day. His oldest sister Margaret has been quite outspoken on the authenticity of the activity and claims to this day that everything was true.

Janet Hodgson left home in her teenage years and married quite young. Due to all the publicity associated with the house, she has kept a very private life to avoid being subjected to the paranormal hell she was put through. Rarely granted any requests for interviews, one of the more recent comments she made to the public was that she fully believes what she went through was real, and still living inside the house in some capacity to this very day. 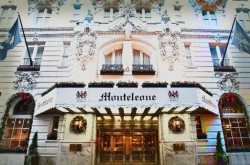 In a town made infamous for voodoo queens and Gothic vampires, it’s no wonder that New Orleans is known as one of the most haunted cities in… Read more…

Sorry! There are no nearby results found

Verify ownership of
The Real Conjuring 2 House in Enfield, England