The Conjuring 2: An Interview with Tony Spera of NESPR

In anticipation of the release of The Conjuring 2 on June 10, 2016, FrightFind spoke with Tony Spera, director of the New England Society of Psychic Researchers (N.E.S.P.R.). He’s been a ghost hunter and paranormal researcher for more than 30 years. Most of that time was spent working with Ed and Lorraine Warren, the preeminent experts in the field in subjects of spirits and demonology – and who also happen to be his in-laws. 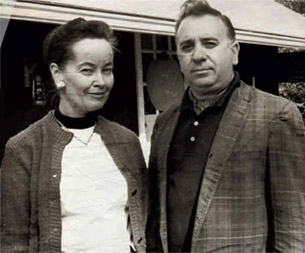 We spoke with Mr. Spera about how the movies came about, the accuracy of The Conjuring, and discussed the controversy about the Warren’s work at the Enfield house. Our conversation with him ran more than an hour, and he had so many fascinating things to say that we will be posting his interview in several installments, so stay tuned for more.

FrightFind: Did Lorraine Warren see the first Conjuring movie? If so, what was her opinion of it?

Tony Spera: She saw it about four times. She loved it. She thought it was very, very good. Now, it wasn’t 100% accurate, but The Conjuring was about 80% accurate, which is very good. Because most of these films that people make that are “inspired by true events,” they just take a very small amount of it and create everything else. But I’d say 80-85% of The Conjuring was right. The filmmakers used a lot of dramatic license at the end, when they had the levitation scene and the chair turning around and things like that. That didn’t really happen. But, most of the other stuff did, including the hair being pulled, and the noises, and the witch. All of that was real and accurate.

FF: Was this the first movie you and the Warrens were approached about?

TS: No. Lorraine talked to Dino de Laurentiis about The Amityville Horror, but they didn’t use much of what she told him. The problem with the first Amityville movie is they based it on the book by Jay Anson, which has a lot of made up stuff in it. He tried to make it more dramatic, but some of the stuff he said was semi-true. Or if it was true, he didn’t present it correctly. 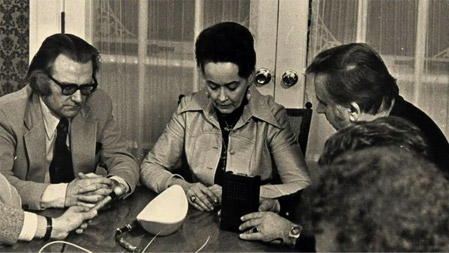 For example, when Anson wrote in the book about the staircase blowing up in front of George Lutz, he didn’t explain that it was a telepathic image sent to George Lutz to make him see it that way. It didn’t really blow up. So when somebody goes into the house afterwards and sees the staircase is still there it doesn’t add any credence. It just looks like everybody’s lying. But George Lutz, in his mind’s eye, saw that staircase explode in front of him, though it really didn’t happen in reality. It was a telepathic image, sent to George, by whatever was in that house, to make him believe it.

That’s the difference between reality and perception and how you write it in a book. If you don’t have knowledge of the supernatural, then you’re going to just write it.  When George says, “I looked and the damn staircase blew up,” and the guy writes it that way without saying telepathically this image was sent to George then it lessens the credence of everything.

So the Warrens were semi-consultants on Amityville, but they didn’t use much of what Ed and Lorraine told them. But they were heavily consulted on The Conjuring.

The Warren’s involvement with The Conjuring 2

FF: How did they decide that the Perron incident [the basis for The Conjuring] would be the one to base a movie on? Were they just kind of riffing with you guys on different ideas?

TS: No, they picked it. We sent them some cases and they picked the one they wanted to use for the first movie. But Ed and Lorraine never called it “the conjuring.” Ed used to call it the “bewitched farmhouse.” I remember Ed saying to me several times that the “bewitched farmhouse” would make a great movie. And I’d say, “Yeah, it probably would, Ed.” Then we’d drop it or forget.

Years later, after Ed passed away in 2006, movie producer Tony DeRosa-Grund called Lorraine and said he had a treatment for a movie he’s calling The Conjuring. And it was the bewitched farmhouse case. So they made the movie after consulting us.

The The Conjuring 2 is based on another case of Ed and Lorraine’s, the Enfield poltergeist case.

FF: Did you or Lorraine have much input on The Conjuring 2? And have you seen any early scenes or previews?

TS: No. Lorraine has not seen the second one at all because it’s only recently finished. I haven’t either. Hardly anyone has seen it except the director James Wan and the editors. But it will be out in June.

Our consulting on The Conjuring 2 was minimal. We shared some pictures of the Enfield house and some recordings of the voices we took there when they asked us. Basically, they took a lot of stuff from the 1977 investigation by Maurice Grosse and his paranormal group in London.

You may have read on the Internet or elsewhere that Ed and Lorraine didn’t even investigate the Enfield house. But they did and there’s proof. We have audio recordings and photographs inside the house. Ed has hours of interviews with Peggy, Margaret, and Janet Hodgson. And recordings of spirit voices that came out of thin air that Ed made. In fact, they sent those interviews over to James Wan and producer Rob Cowan, and they’re going to try to use the real voices at the end credits.

So, Ed and Lorraine were there. They saw a lot of phenomena occur. The voices were the most startling. Ed would be talking and all of a sudden the voices would answer him. One time, Ed says out loud, “What are you?” And the spirit says, “I’m a soldier. Soldier.” Like that. Then Ed says, “Are you a Christian?” And the guy says, “No.” And Ed says, “What are you?” And the guy says, “I’m a soldier.” Ed says, “Aren’t soldiers Christians?” And then the voice just makes a long, growling sound, “Grrrrrr,” like that. It would answer Ed like, “What’s your name?” And he’d tell him, “My name is Tommy.” And another one’d say, “No. I’m Tommy. He’s Fred.” It was two people talking to Ed, named Tom and Freddy. That’s right out of thin air in that house. Crazy, crazy, phenomena like that occurred.

The startling thing is, most human voices that you hear, they don’t communicate back and forth like that. You may hear your name called in a house, but they’re not going to answer questions. They’re not going to go back and forth communicating. That’s the difference. These voices were actually listening to what Ed said and answering his questions.

In fact, Ed was with another investigator in the house one time, a guy named John Kennyhurst. He sent John to the car to get a bottle of holy water, but he couldn’t find it.  He came back and said, “Hey, Ed. I can’t find the darn holy water. It’s not there. I looked all over the car. It’s not there. I know I put it there, but it’s not there.” Which is the kind of thing that would happen in a haunted location with a devil. So Ed decides to make his own holy water.

He took water and he put some salt in the water and did a blessing over it, “In the name of the Father, Son, Holy Ghost,” like that, in front of the water to make it holy, hopefully. He had nothing else to work with. So Ed says, “Let’s walk through the house and start sprinkling this holy water.” And a voice, out of nowhere, says to Ed, “It’s not blessed. It’s not blessed.” Just like that. In other words, he knew that that holy water wasn’t blessed holy water. It wasn’t real. That’s the intelligence that these spirits had.

What I do know is The Conjuring 2 is supposed to be bigger, richer, and scarier than the first one. I think it’s going to be fantastic. I can’t wait to see it.

TS: I asked a promotions person from Warner Brothers if she’d seen the movie. She said, “Well, I only saw the first raw cut. It scared the shit out of me. It was the scariest thing I ever saw.” I also heard through the grapevine, through other producers and stuff, that it’s a real spine-tingling, scary movie.

FrightFind definitely can’t wait to see the new Conjuring film and we look forward to hearing more from Tony once he’s had a chance to see the premiere. We’ll let you know what he says.