The Third Degree of Terror is a free home haunt open three nights a year each October. The haunt is designed for all ages and contains detailed, realistic and immersive scenes, utilizing lighting, sound effects, and scents to full advantage.

Here is the backstory for the new Carnage on Cell Block 9 theme for 2022:
“They called him…the Storm Slayer.
When lightning flashed across the sky and thunder raged, Malachi Leeds stalked the night in search of helpless families to prey upon. As summer storms lashed the valley, the death count grew as more and more homes were broken into, their occupants murdered in unspeakable ways. Fear grew each time storm clouds gathered. Locked doors and barred windows failed to prevent his entry.
Then came the August night when authorities captured Leeds with his hands still soaked in blood after a fateful visit to the Goulet homestead. His trial was swift and the justice, merciless. Leeds was sentenced to Ghoul County Correctional prison to await his fate, death by electrocution. On October 31, 1958, the prison guards strapped Leeds to an electric chair and pronounced “Prisoner, electricity will now be passed into your body until you are dead, in accordance with the state law.” They watched in disgust as he laughed at them and yelled out “I’m gonna ride the lightning!”
The switch was thrown and sparks flew. But then something bizarre occurred. Instead of Leeds’ body spasming as electrical current passed through him, his body was suffused in a brilliant glow. It became so bright the guards and witnesses had to look away. After a final blinding flash, the electric chair shut down. When the onlookers could see again, they were shocked to find the chair empty. There was no sign of Leeds’ body.
In the days that followed, the prison slowly dissolved into chaos. Terrified inmates heard an eerie voice emanating from the light fixtures and wiring in their cells. Some claimed to have seen a floating specter resembling Leeds pass through the prison walls, bolts of electricity arcing from his hands and feet. Lights flickered on and off randomly, while prison bars delivered shocking jolts. Prisoners fell into madness, guards into a state of paranoia. At last, the governor decreed that Ghoul County Correctional must be closed and abandoned.
But now someone has decided to reopen the prison. Your time of incarceration has come. Be prepared to be marched into Ghoul County Correctional and maybe…just maybe…your sentence won’t be…LIFE.” 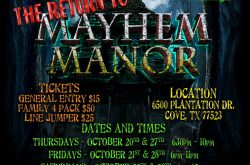 THIS IS ONLY FOR 2 WEEKENDS, INCLUDING THURSDAY! STAGE DOOR THEATER WILL HAVE TRAINED ACTORS! Read more… 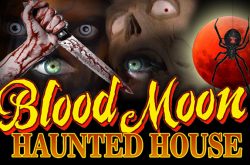 Blood Moon Haunted Scream Park is Southern Illinois largest indoor/outdoor haunted attraction, where all your greatest fears can be experienced at one place. Read more… 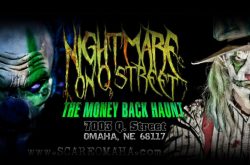 Nightmare on Q Street Haunted House in Omaha, NE has a New Name Nebraska’s best-haunted house has moved and is now Bloodrush: Forest of Terror in Omaha,… Read more…