Fans of Stephen King will recognize Thornewood Castle Inn as the location of the creepy film Rose Red, which was a television miniseries released in 2002. The location of the film wasn’t a fluke. The castle has been the home to many ghost sightings, hauntings, floating orbs and mysterious happenings.

Chester Thorne built the castle for his bride, Anna. They raised their daughter Anita in the mansion. She lived there with her first and second husbands for many years too. After the violent death of Anita’s second husband in 1959, Anita sold the castle. There have been several owners in the years since it was sold outside the family.

The castle is currently a bed and breakfast as well as being on the National Register of Historic Places. Guests at the haunted castle have reported numerous mysterious happenings. The owners, Deanna and Wayne Robinson, have seen Chester Thorne’s ghostly apparition on many occasions. The gardener and guests have seen him around the castle too.

Thorne has been known to unscrew light bulbs in the rooms. The owner asked him to write her a note instead of unscrewing the light bulbs. In the time since the request, Deanna Robinson says that he only touches the light bulbs when he’s particularly happy or unhappy about something she’s done.

The Ghost of Anna

Guests of the castle have seen Anna Thorne’s ghostly form sitting at a window overlooking the garden. One of the rooms is called “Anna’s Room” where her ghost has been sighted often. There’s an antique mirror in the room, which is said to be original to the home. In this mirror, guests have seen the reflection of Anna. Brides have said to see Anna brushing her hair.

The Thornes’ son-in-law shot himself in the gun room of the castle, and that ghost has made appearances too. While many of the sightings can be scary or startling, the apparitions in the castle seem to be calm and playful.

At a wedding shot on the grounds and in the castle, a photographer and his wife saw floating orbs while trying to take pictures of a newly married couple having their first dance at the reception. The wife had experience with sightings before and asked the spirits to dance elsewhere. Instantly, the orbs disappeared from the viewfinder.

A previous owner’s child drowned in the small lake, and guests have reported seeing a small child down by the lake. When they arrive, the child is nowhere to be found.

The only startling, scary report came from a guest who says that at 3:33 a. m. his locked room door began to open and slam repeatedly. After four slams, the ghost ceased its violent activity. This guest also reported after he left the haunted mansion, he developed the pictures from his stay in the castle, and the film showed full apparitions in them.

It’s not surprising that the ghost’s of the Thornes would linger in their beloved castle. When Thorne built the castle for his bride, Anna, he had much of the bricks transported from a manor in England. The oak paneling and staircase as well as the stained glass were brought over by ship from another castle in England too. After four years of loving construction, the Thornes spent their entire married life in the castle and raised their daughter there. 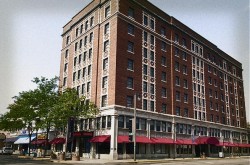 Fond Du Lac, Wisconsin lies at the foot of Lake Winnebago in the northeastern area of the state of Wisconsin. Read more…