Published by FrightFind On August 12, 2016 Leave a response 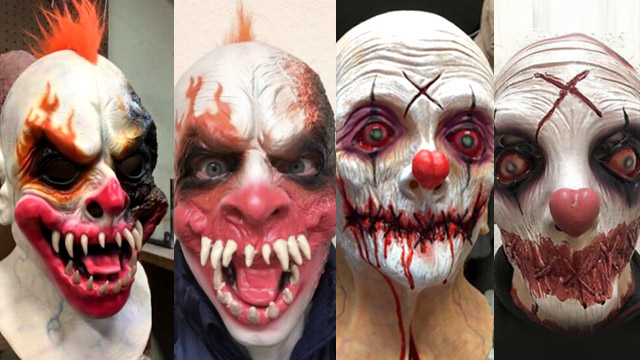 Like you, we at FrightFind are big fans of all things horror. That includes all the clever and talented artists who create the make-up, masks, and other effects used in movies and attractions to bring nightmares to life in the best, most horrifying ways. So when we learned that Jim Brown of Eville J’s Creepy Closet was the victim of intellectual property theft we got fired up.

We’re a big fan of Jim’s work and even travel with one of his nightmarish clown candy bowls. So when we heard this story, we thought the more people that hear it the better.  Plus, these overseas mask knockoffs are scary. “Bad” scary, not “good” scary. 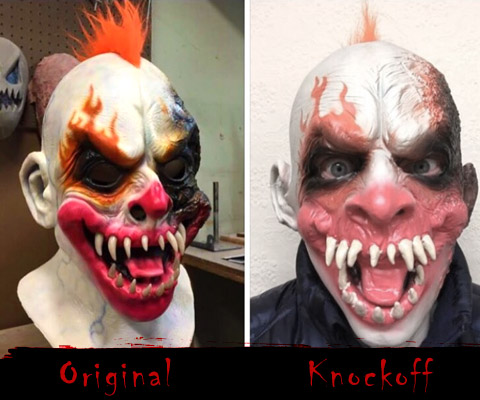 As you can see in the comparison photo above, Jim is clearly being ripped off here. So we’re trying to spread awareness the best way we can. How can you help? Be sure to go directly to the source when looking to purchase a mask or any other Halloween or haunted attraction item. That way you directly support the people and companies making these items without unintentionally giving your money to the asshats that are stealing from Jim and other artisans like him.

But enough from us. Here’s what Jim has to say about it:

Greetings earthlings, my name is Jim Brown and I am the owner/operator of a small Halloween mask and prop making business called Eville J’s Creepy Closet. I have been asked by my friends here at Frightfind to write up a little something about my recent run in with an overseas company that has been stealing mask designs from American mask making companies, mine included.

Now I realize this is nothing new and it’s been going on for years, but until it affects you directly it’s an easy thing to ignore. For me, this started on July 28, 2016 when I received a message with a picture attached from a customer asking if said picture was something I had made or if it was a cheap knock-off of one of my masks? A cheap knock-off it was! At first I brushed it away and tried to forget about it. However, the more I got to thinking about somebody taking something I had designed, the more angry it made me. It wasn’t even four hours later that I found out it wasn’t just one design being ripped off but two, and they both were very obvious copies of my work.

Now let me stop this rant for just a second to give you a little back story about me and Eville J’s. Like many of you, I love Halloween and the horror genre, always have. What started out as a hobby to extend the Halloween season has little by little snowballed into pretty much a second job. It keeps me busy all year long. But even though every year we continue to grow and get bigger it is still just a part time gig I do in evenings and on weekends. I spend lots and lots of hours sculpting, mold making, painting, etc. 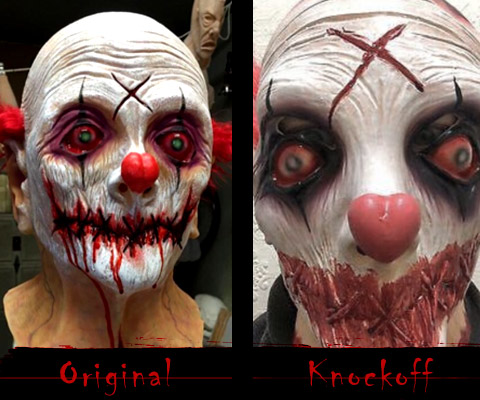 In the last few years I’ve branched out to attend haunt conventions, which is fun and a chance to connect with our fan base. It is ton of work and a big expense, and you can only hope that it will pay off. So when you start to reflect back on all the years and all the work you’ve spent to build a name, gather a following, and make things that people recognize as yours, it’s very VERY frustrating to find out someone has come along and basically said “OK, these designs are mine now.” Then to find out that they are mass producing them overseas and selling them for less than I do! What’s worse, from what I’ve been told, there’s really not much you can do about it. Even if you go to the trouble and expense to patent, copyright, trade mark, licensing or whatever, it’s still hard to fight it. Unless you can do it all internationally as well, then you’re pretty much just SOL.

I did contact the company that had the listings up and they apologized and claimed they didn’t know they were copies of my work and they had gotten them from a Chinese supplier. They took all listings down, and also claimed they would check their records to see if they could get me the name of where the mask came from. I don’t expect that I will ever really get that info. And if I do, I’m not sure it will even matter!

So what’s the answer? This I do not know, but what I do know is that when I voiced my anger the outcry and support I got from my fellow American mask makers and Eville J’s fans and followers was overwhelming. So can we stop this kind of thing? Maybe someday, if laws are changed to protect artist designs for oversea companies. But for now I think you just have to make the best work you can and offer your customers the very best service you can. Then maybe we can steal back our business from the rip off bastards that can’t create something of their own.

I’ll end this by saying thanks again to everybody who has stood behind us and supported us. It means a lot. Seeing that kind of love for my tiny little shop that I run out of a one car garage fuels my fires and makes me want to drive harder to give people even better products and service. So thanks and keep watchin’!

One last thing we wanted to mention. Who in their right mind would steal from someone that makes stuff this twisted? That’s like stealing from Jeffrey Dahmer’s fridge for cryin’ out loud!