Whether its history as a hospital or its proximity to the Alamo where hundreds of men once fought and died is to blame, the Emily Morgan Hotel has a long history of hauntings. Today, the staff receives a regular stream of reports from guests about paranormal activity, and it is known as one of the most haunted sites in Texas, if not America.

Originally built in 1924 as the Medical Arts Building on the Alamo Plaza, this Gothic-revival influenced building sets the spooky stage with the unique architectural feature of terracotta gargoyles that portray various ailments. Patients were treated there for more than 50 years until the building was converted to offices in 1976 and to a hotel in 1984.

Eager ghost hunters are encouraged to book a room on one of several particularly active floors as well as checking out the haunted elevator. The fourteenth floor was once the crematorium as well as being a hospital and surgery floor along with the twelfth. On these floors and on the eleventh, people report experiences such as smells of alcohol and the sense of being touched along with unexplained noises such as the sound of a hospital gurney rattling around. The ghost of an elderly woman weeping is often seen on the eleventh floor.

The ninth, seventh and third floors are said to be particularly haunted as well. On these floors, people have seen apparitions and heard strange noises. One of the most terrifying experiences happened to a guest staying on the third floor.

A woman was awakened in the middle of the night to a humming sound, and woke to the sight of a young girl sitting at the foot of her bed inviting her to sing a song. Apparently this did not frighten her enough to seek another room because on the following night, she reported the sensation of someone crawling into bed beside her.

Another guest was tormented by the sound of clanking chains in her room on the eleventh floor. She was so frightened that she phoned the front desk, and the woman working there promised her a full refund if the problems continued. The following morning, the guest mentioned the conversation to the desk clerk who informed her that a woman had not been working the previous night’s shift. To whom or what had the guest been speaking?

Going Up? Down? Unexplained Elevator Activity

The peculiar behavior of the elevator at the Emily Morgan cannot be attributed to mechanical failure as it has been inspected many times. However, it is said to take guests repeatedly to the hotel basement that was formerly the hospital’s morgue. It also stops on floors without being called to them and sometimes will travel back and forth between floors six and seven.

Ghosts of the Alamo

There is little doubt that along with the many tragedies that must have played out on these floors when it was a hospital, the ghosts of the Alamo dead walk the halls of the hotel as well. More than 600 men fell in battle there in 1836, and their bodies were stacked and burned. Many suggest that their violent end and lack of a peaceful resting place has caused their spirits to continue wandering all these years later. Perhaps they do not even realize they are dead. They may still be enacting the old battle that killed them.

Ghost enthusiasts in search of a scare are sure to find one at the Emily Morgan Hotel. If they aren’t visited in their own room by restless ghosts, we suggest a stroll around the hallways or a ride in the elevator might be a good place to entice an encounter with the spirits that haunt the Emily Morgan
. 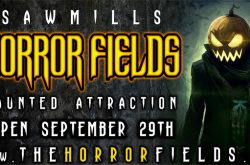 The Horror Fields Haunted Attraction offers families of the Hickory and surrounding areas a night of excitement they will never forget. Read more…