Roy Wooley of SyFy’s Face Off: Journey to Hollywood

Published by FrightFind On May 5, 2016 4 Responses 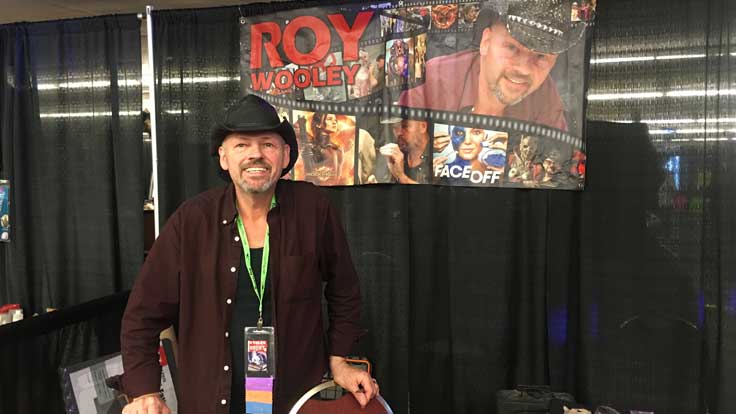 It’s not often you meet the son of an Alabama preacher and coal mine engineer that has become one of the top movie makeup artists in the industry. FrightFind got that chance while at the West Coast Haunters Convention in Portland, OR.

Aside from Face Off, you may have seen Wooley’s work in movies like Zombieland, The Hunger Games (Mocking Jay Part 1 & 2), Halloween 2, and Captain America: Civil War. But how does a guy go from Alabama coal country to District 12 in Panem? 5 words: An American Werewolf in London.

When Roy was a wee lad he snuck into the horror classic, An American Werewolf in London. Roy knew right away that turning people into werewolves was what he wanted to do for the rest of his life, without the biting of course. We can’t argue that point. Rick Baker and his team won an Oscar for their groundbreaking makeup and special effects work. Watch the transformation below and realize this was all done without any CGI. Very inspiring.

These were the days before YouTubes and Googles. Learning the trade wasn’t easy and took dedication coupled with a handy subscription to Gore Noir Magazine.

In 1995, Roy moved to Georgia and started working for the prestigious Netherworld Haunted House before they had a makeup department. He was hired as an haunted attraction actor. However, he eventually started doing his own makeup to scare things up. Roy’s talents stood out and the Netherworld recognized that. They liked his work so much that they expanded a makeup department and the next year they started airbrushing. Today they have 12 makeup artists who work on 70 to 80 actors a night.

How Roy Made it to SyFy’s Face Off

Fast forward to 2011, Roy is working as an independent contractor who works on low budget films and is still killing it at The Netherworld. Roy’s break came when John Stewart’s Daily Show featured The Netherworld on their Halloween show. The SyFy channel saw the episode and recognized Wooley’s talent. Face Off reached out to Roy and offered him an audition for Face Off’s season 3.

Roy made the long drive to Orlando and was given just 15 minutes to do makeup on himself for his audition. Face Off liked what they saw and invited him to the next phase of try outs. He made an even longer drive to Los Angeles, where this time he was given 2 hours to do his magic on a model. All that driving paid off, because 30 days later, Roy is a contestant on Face Off season 3. On the left is Roy’s 15 minute self makeup application. On the right is Roy’s Los Angeles audition.

For the first challenge of the season, Roy teamed up with Rod Maxwell to create a character that would fit into the famous Star Wars Cantina scene. Coincidentally, Roy knew Rod from back in their early monster making days. Maxwell used to have an ad in Gore Magazine where Wooley would buy latex and nose putty. They joined forces and created a tiny Tatooine bounty hunter in a giant robot suit. They impressed the judges so much that they took 1st place. He says he “loves Star Wars but isn’t a geek about it.” It doesn’t matter to Roy who shot first. “Greedo is dead, Han is alive, and that is all that matters.” Roy would place 4th that year, but returned for Season 5 (veterans versus newbies) where he’d make it to the finals and place 2nd. Life After Face Off

After Face Off, the projects started pouring in. From small budget films like The Adventures of Paula Peril, to big budget blockbusters like the Hunger Games, Roy does it all. He continues to only work as a freelancer and that is just how he likes it.  “I would rather be doing what I do as a freelancer. If I work on a small budget movie, I do everything: I design it, I make it, I apply it. But then I can go and work on a project like Guardians, and I’m there just to do makeup. That’s like a vacation!” And if you are wondering, he is referring to Guardians of the Galaxy 2.  When asked what we should expect from Guardians of the Galaxy 2, Roy just gave a big smile, and said “it’s going to be awesome.”

When he’s not creating movie monsters and aliens, he’s still running the makeup and effects department at The Netherworld Haunted House. They are lucky to have such an experienced artist to train and mold the young and eager minds of Georgia. When asked what advice he would give a young aspiring makeup artist, he says “Practice. Learn your anatomy. Go to workshops. Don’t go spending $30,000 on makeup schools.”  That’s right kids, PRACTICE!

So with his signature cowboy hat on, Roy hopped onto his dragon and rode off into the Portland night. Maybe he was going to look for inspiration for his next monster. Or maybe he just needed a Voodoo Doughnut.

I’m A Werewolf Baby: An American Werewolf In London Remake In The Works