If there is one thing that rings true about the paranormal, is that it can exist anywhere, anytime, and in places of unlikelihood. Hawaii is the fourth-smallest state, covering a little over six thousand square miles and hovers near a population of 1.5 million. Often forgotten due to its location, Hawaii is not to be dismissed from the paranormal community. Believed to be inhabited as far back as 300 A.D., Hawaii is packed with countless ghost stories and haunted locations. One of the more haunted locations on the island? The Manoa Chinese Cemetery.

Located on the island Oahu, and sitting just a mere three miles west of Honolulu, The Manoa Chinese Cemetery has the distinction of being both the oldest and largest Chinese cemetery in Hawaii. The cemetery was built all the way back in 1852 and stands out among other island cemeteries due to the particularly ornate decorations which are also accustomed to Chinese cemetery standards, such as facing both the water as well as being lined by trees. Aged granite lions and dragon-like statues are peppered throughout, while a banyan tree appears to be the cemetery centerpiece. Feng shui plays a popular role here as the Chinese believe in the principle of geomancy and its role in placating unstable spirits into a more harmonious role in the universe. With such a concept, spirits here are certainly alive and well.

Is The Manoa Chinese Cemetery Haunted? 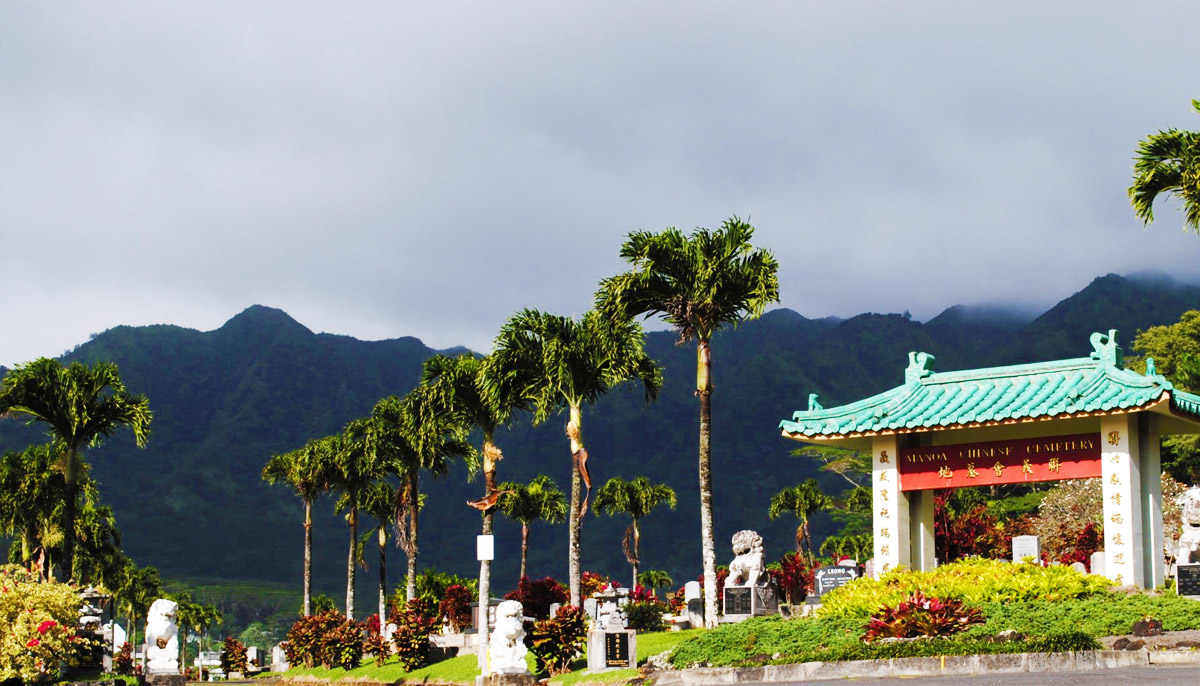 One of the more peculiar paranormal activities here is the presence of children. Naturally, the cemetery possesses a quietness, but visitors have claimed to hear the undeniable laughter of children despite none being visible. At other times visitors have noted the crying sounds of infants without any around. Near such graves in the evenings, visitors have claimed to see orange orbs flurrying around over the tombstones. In many descriptions, the orange spots appear to be cinders from a fire that doesn’t exist. Within Hawaiian culture, there is the belief of the “akua lele” which is described in similar circumstances, is that of a flying god who brings about death and bad luck to some.

In 2008, a Honolulu police officer was dispatched in the middle of the night to a noise complaint at the Manoa Cemetery involving possible trespassers. Arriving, the officer spotted a pair of what looked to be young teens hiding behind a tombstone. He approaches the tombstone only to find that the pair had disappeared. Walking back to his patrol car, the car’s radio suddenly turned on with the volume all the way up. Nobody was there to turn it on, and the officer switched it off only to see a mysterious force turn the radio back on and drive the volume dial up before his very eyes.

The Manoa Chinese Cemetery is still one of the most popular tourist destinations on the island of Oahu. The cemetery itself is also one of the more visited ghost tour spots on the island, however, if you go and see a bring orange flying orb….get out as fast as you can!

The Snedeker House – The Haunting in Connecticut
The Old Gray Cemetery

Pumpkin Days on the Farm

1901 documented farm home will definitely be a memory maker out of all ur haunts! Read more…