Is the Yosemite View Lodge Haunted?

One of Yosemite’s most haunted locations is the Yosemite View Lodge in El Portal, California. The rustic hotel sits at the edge of the Merced River, near the entrance to the park where guests have reported a real haunt and ghostly happenings.

The River People of Yosemite

The Lodge on the Merced River is in a peaceful setting, but looks can be deceiving. One guest at the Yosemite View Lodge was traveling with a friend. Their first night at the lodge was quiet, and they weren’t prepared for what happened the second night. One of the guests awoke in a terrified state after seeing a shadow person standing near the bed. The figure had no discernible features, didn’t speak, and appeared to be approximately five feet tall.

The guest was so horrified that she called to her friend to witness the apparition. She wasn’t able to sleep for over an hour after the encounter. She referred to the apparition as one of the river people because she wondered if it was a native spirit and felt that the river may have been responsible for the phenomenon. The guest possesses psychic abilities, but it’s unusual for her to see spirits. When doing an internet search, the psychic found that other people have had similar experiences.

Shadow people have appeared numerous times in guest rooms at the lodge. Most of the guests aren’t aware of the hotel’s haunted reputation and aren’t provoking the spirits. The apparitions usually disappear when they realize that guests are aware of their presence. On an April day, three friends checked into the lodge. When they entered their room, two of the guests felt a presence that was most powerful in the bathroom. During the night one of the guests awoke to see a shadowy apparition standing at the foot of the bed. Upon checking, found that both of her friends were asleep. When the friends talked in the morning, one of the trio reported seeing a shadow person standing near the fireplace. All three feel that the hotel is haunted and get chills thinking about their experience.

One woman has stayed at the lodge with her family on four occasions. One night she heard someone walking around the room, but her husband and daughter were asleep. She had similar experiences in other rooms at the lodge. One night she was tapped on the shoulder. Thinking it was her daughter, she checked to find her sleeping peacefully. She had the sensation that there was a presence in the room and remained awake all night. In the morning, she did an Internet search and found that several guests had similar experiences. Even though the family planned to stay another night, they packed and left the hotel.

One family from Australia was unaware of the haunted reputation of the hotel. The first night, the six-year old daughter complained that someone was pinching her. No one was near her. During the night, a man described as creepy knocked on their door and said he was looking for someone. Later, the husband opened their door and saw the man down the hall staring at their door. Was he a ghost?

His wife had the sensation that there was a spirit in their room. During the night, a loud crash woke them. One of their bags that had been in the center of the table was across the room. After their experience, the woman Googled the hotel and learned that numerous guests have had similar experiences at the haunted hotel. 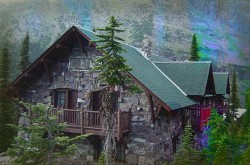