“Going up?” The common lilt of a programmed elevator voice took on a macabre tone when guests at The Adolphus hotel in Dallas, Texas, heard the automated question playing on loop while a series of elevator doors opened and closed by themselves. The haunted elevator is far from the only fixture in this hotel that has become privy to paranormal activity. Other reports include staff watching windows fly open inexplicably and the music of a band playing along with sounds from a grand piano that was sealed away long ago reverberate through the hallways. However, when staff have come to inspect the sounds there are no instruments or musicians to be found. One former guest became terrified by their firsthand experience with these melodious albeit, spooky ghosts.

“I stayed years ago..2004. I had the worst paranormal experience…stomping above my room…like people running around…people running up and down the huge hall outside my room…and no one was there…you could see down the hall from the peephole in my suite. It was then that I noticed five or six men and women walking into my room at the tune of music….women smoking cigarettes and men with black hats on…they walked straight through my window and were gone,” recalled the shaken guest. “Then a negative energy…Black looking hair in the mid-air was swirling in front of me before coming very close and disappearing…”

Perhaps the most chilling story is that of a ghost who is referred to as the “lady in white” who has long taken up residence at the hotel. In the 1930s, a bride-to-be was left at the altar. Inconsolable from the heartbreak of watching her dreams of “happily ever after” become dismantled, the woman’s “body was found, hanging a few feet from where she was due to say her vows.” Several accounts speak of the bride-to-be taking up vacancy on the 19th floor, where the sound of her footsteps can be heard along with the sobs of a broken heart. Along with the noises, many guests have often seen the ghost of the woman fully materialize and “accompanied by a music box playing a 1930’s tune.”

Other incidents include loud bangs, unexplained knocking, and the chilling sense of an invisible presence enveloping the rooms and hallways. The historic hotel is bathed in luxurious fixtures, and rich with the possibility of a paranormal experience you won’t want to miss. The Plaza Resort and Spa The Lemp family who built the mansion experienced a lot of tragedy and drama in spite of their wealth. William Lemp shot himself in the house. Read more… 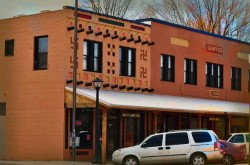