From strictly a paranormal perspective, the state of Connecticut is a very interesting state. Perhaps the most famous haunting ever within it, the Haunting In Connecticut, ranks high in the supernatural stratosphere of the United States. And of course, everyone knows about its most famous paranormal investigation couple, Ed and Lorraine Warren. Yet one of the oldest to ever find statehood, the geographical area that makes up Connecticut today was believed to be inhabited as far back as 1614. Over three centuries worth of graves have been put into the ground and to this very day, some just refuse to rest in peace such as the Union Cemetery in Easton, Connecticut where Ed Warren himself had an encounter.

Is The Union Cemetery in Connecticut Haunted?

The very town of Easton, Connecticut was founded all the way back in 1757. Located in the southwestern corner of the state, Easton was considered a fairly remote location at the time due to the treacherous hillsides that ran along the Aspetuck River. Records are sketchy as to when the ground for the cemetery was first being used. The oldest tombstones in the cemetery are believed to be dated to somewhere in the 1600s, but even then there are unmarked graves that could possibly hint at something older than that. The cemetery itself is only a few acres wide and is flanked closely by of all things the highway junction routes of 59 and 136 right there in Easton where the cars can be audibly heard from the cemetery. But what exactly haunts the Union Cemetery?

The most famous spirit in the cemetery is dubbed “the White Lady”. She has been described as having a long face with cascading black hair on either side of her head and wearing a long flowing, period piece white dress. The White Lady has been known to walk along Highway 59 and many times drivers have encountered her ghostly visage up close and personal when some have even said to have driven their cars straight through her. Police have been called over and over to Highway 59 and Union Cemetery for calls of a woman in white walking around the roadway, but upon arrival, she’s never found. 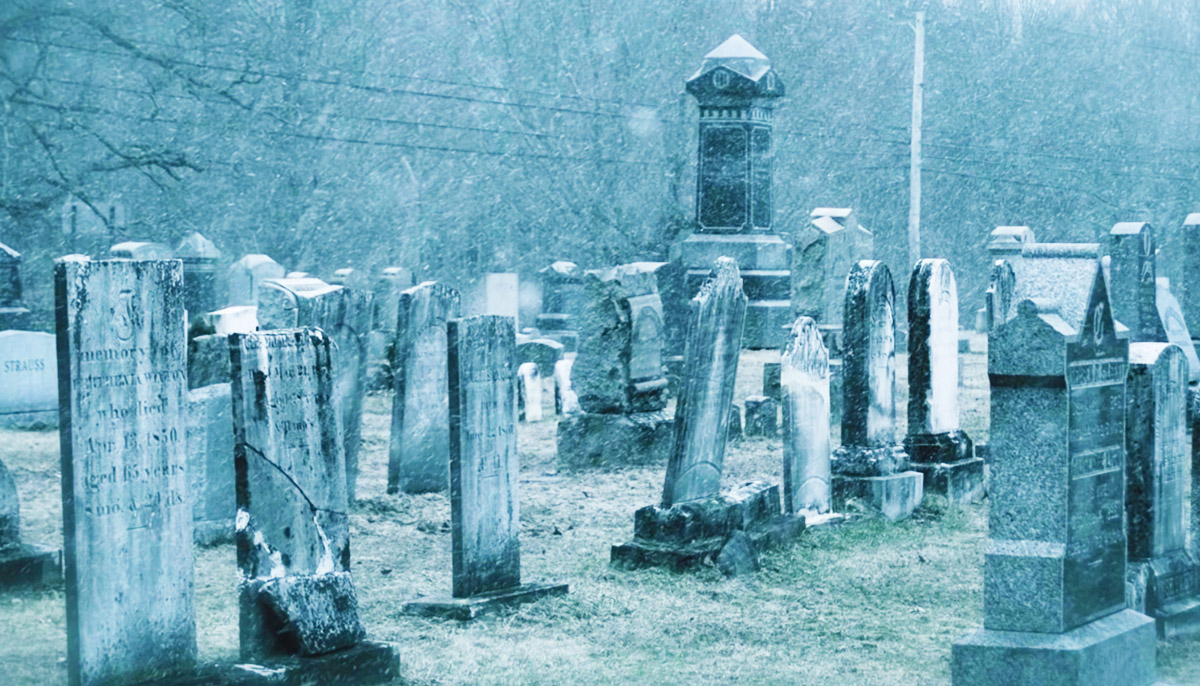 Local Connecticut artist Roderick Vescey is one of the first ever to bring about attention to his roadway encounter with the White Lady. Driving home late one evening on Highway 59 he encountered a particularly misty patch of very low fog on the roadway. Vescey thought nothing of it as that time of year the weather in Connecticut was habitually damp, but looking back he did begin to question why it affected just that particular area of the road adjacent to Union Cemetery. As he neared his sedan into the low hanging mist, Vescey spotted inside his sedan’s passenger seat, an older man in a bowler hat with a beard and sad expression on his face. A moment later the man disappeared and when Vescey returned his gaze to the road, the White Lady was standing a mere few feet from the hood of his sedan. Without even realizing what was happening and failing to brake, his vehicle passed through her completely. Vescey said that as his vehicle passed into her a giant rush of wind blew across his body and that for the next few miles, everything he saw out of his eyes had an unexplained red tint to it.

Ed Warren himself had a particular paralyzing encounter with her. Ed reportedly spent an entire week at the cemetery overnight, observing a bizarre series of paranormal lights that culminated with a chilling encounter on September 1, 1990, at precisely 2:40 am. Warren observed the wild flickering of paranormal orbs and lights when he heard a woman weeping somewhere in the cemetery’s distance. Traipsing along rows of faded tombstones in the dead of night, Ed began to follow the lights and noticed that they began collecting themselves and forming into the shape of the White Lady. Ed claimed to approach her spirit when a series of crudely shaped black shadows that resembled the form of a dog and it refused to let her spirit drift towards him. Warren said that instead, this mysterious shadow seemingly forced her spirit to drift toward the Highway 59 roadway area.

The exact history of the White Lady may never be truly known, nor will the origin of the black shadow that Ed Warren encountered in the cemetery that night. Of all things, Ed Warren did record the encounter on a VHS tape that he had left running in the cemetery that night and the tape’s contents remain securely locked up in the Warren’s Occult Museum.

Ravenwood Haunted Farm
The Snedeker House – The Haunting in Connecticut The Lodge at Koele