Two of the most haunted rooms in the hotel are room 411 and room 511, which is directly above the former room. Hotel workers see and experience a lot in a given day, but at the Casa Monica Hotel, workers experience more than most. A guest checked into the hotel one day but never came down the next morning or checked out. Workers found his limp and lifeless body hanging from the ceiling in room 511. Guests now report feeling icy winds moving through the room, finding cold spots in certain places and hearing footsteps when they were the only ones in the room. Guests staying in room 411 sometimes see ghostly apparitions of men in old-fashioned clothing standing in the room. The men disappear from view within seconds.

Though the owners and management of the hotel refuse to acknowledge any ghostly presences in the hotel, housekeepers and other workers have plenty of stories. Many despise cleaning the fourth floor because of the things they see and hear. Dozens of maids have reported hearing kids running, playing and laughing in the hallway when cleaning rooms, but when they opened the door to talk to them, the hallway was empty. Others heard radios and alarm clocks come on in empty rooms and sinks turn on inside empty rooms. The stories and experiences are so common that the housekeeping department now allows maids to work together to clean rooms.

One young woman hired as a housekeeper heard the stories but ignored them until she had a peculiar experience of her own. While working on the fourth floor, she knocked on a door to alert guests of her presence and heard a voice beckoning her from inside the room. When she walked inside, she found the room empty of any living people.

There are also stories told of ghostly apparitions dressed in 1920s clothing spotted in various places around the hotel. Some believe that these ghosts date back to the heyday of the Casa Monica. Several guests spotted a woman in an elegant white dress, and others saw men in morning coats or dapper suits wandering the halls. Though the Casa Monica Hotel went through a major renovation in the 1990s, the ghosts of former guests continue visiting the old hotel year after year.

Tips for your stay at the Haunted Casa Monica Hotel

Be careful who you ask. The management is said to frown on employees discussing the ghosts of the hotel. However, if you ask the workers, you might get a great story or two. Use your charm if you’re going to ask anyone at the desk and it’s a good idea to wait until the later hours when you ask because fewer big whigs are around to hush anyone up. And of course, respect hotel guests if you’re going to try any ghost hunting. 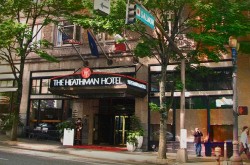 Is the The Heathman Hotel haunted? Some reports of hauntings from hotels are of a fairly benign nature with guests reporting strange noises or apparitions spotted in… Read more…