St. Augustine, Florida is the oldest city in the United States as Spanish Admiral Pedro de Aviles founded the city all the way back in 1565. The city was named for the Catholic saint as Aviles and his men made contact with the shores of the city on the saint’s feast day. Over the centuries of beachside prosperity that came to the city, one of the most lasting is the Ponce De Leon Hotel. Built in 1888 by Standard Oil co-founder Henry Flagler, the Ponce De Leon Hotel was built to be the most luxurious hotel in the area. Poured from a concrete foundation that was revolutionary at the time along with local coquina, the immense hotel was fashioned and styled in Spanish Renaissance architecture. At one point Flagler even commissioned Louis Comfort Tiffany to create and install the beautiful stained glass interiors of the hotel. But just how did this luxury hotel turn into a private liberal arts college that’s haunted?

During WWII the Ponce De Leon was temporarily commandeered by the United States Coast Guard as a training center, and as headquarters for the newly formed Coast Guard Reserves. After the war, the hotel was actually part of a 1964 Civil Rights sit-in that was led by Dr. Martin Luther King which resulted in a number of violent clashes and arrests. By 1967, business at the once-booming luxury hotel had dried up and it was put up for sale as tourism as a whole had declined in the area. Philanthropist Lawrence Lewis Jr, a distant nephew of Henry Flagler himself, purchased the sprawling nineteen-acre property with a vision of creating a small, private liberal arts college to try and bring some prosperity back to the area. In 1968 Flagler College was officially opened with the Ponce De Leon Hotel serving as a preserved historical centerpiece to the newfound college.

Said to be haunting Flagler College is none other than the spirit of its namesake, Henry Flagler himself. His death was officially recorded in 1913 after a terrible fall at his home, and because he was so attached to the Ponce De Leon Hotel, his body actually was moved there to be laid in state as he was so popular there and in the St. Augustine area in general. There’s a long-standing oral legend that when it came time to remove Flagler’s body from the hotel, all the doors in the area in which he was laid began to open and close furiously without anyone touching them at all!

Janitorial staff have been known to see Flagler’s ghostly image staring back at them from different surface areas all over the hotel. Henry was a bit of a ladies man back in the day and was known to have a wide assortment of mistresses all over the place. His second wife Ida Flagler was said to come from a family with extensive mental health issues, and Henry’s philandering took a toll on her to a point where he had her committed to a sanitarium. However, prior to this Ida was known to regularly hold seances via Ouija Board in the hotel. When Ida passed away, many of those close to her reported seeing her ghostly spirit drifting throughout the halls of the hotel! In particular, her spirit was reported to have always been drawn to an oil painting portrait of Henry on the wall and she is said to have stared at it for an uncomfortable amount of time before fading away.

Building upon Henry’s assortment of mistresses all over the city, he is said to have favored one of them above all, and while her name remains a mystery her presence at the hotel is quite well know. She’s commonly referred to as “The Woman In Black” by many and was said to be given her own personal suite on the 4th floor of the hotel. Whenever Ida came around, Henry was quick to see that the young mistress was locked away in the suite so as to avoid detection by his wife.

Over time, the young woman became frequently depressed and alone in her isolation that she committed suicide in her room. Today, her veiled face and shadowy black dress figure is said to be traipsing around the 4th floor of the hotel, an area which has been boarded off from the public for quite a while. Adjacent to this area of the hotel is the student dormitory where many enrollees claim to hear high pitched screams as well as see objects flying off shelves when nearing this area. Strange light anomalies have been reported to permeate this area of the hotel that reaches into the college grounds. Reportedly a few brave students have breached the closed-off area to the room and a campus rumor claims that some of them entered the room and saw a shadowy figure dangling from the ceiling by their neck.

Today, Flagler College enjoys tremendous academic success and the Ponce De Leon Hotel area of the grounds is one of the most visited and photographed places in all of St. Augustine. But be sure to examine any photographs taken inside the hotel area as many people claim to pick up shadowy figures in the background of their image. 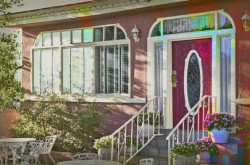