The hotel was built in 1909, and has 27 rooms for guests as well as a pub downstairs. It’s the pub that has a regular spirit who loves to play the old piano in the back room. It’s said that a gold miner named Howard Bok was murdered in one of the rooms of the hotel. The cooks and bartenders report that the best time to hear Bok playing the piano and laughing is around closing time. 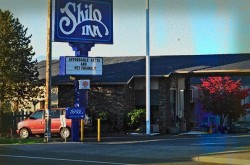