During a visit with his team at The Pfister Hotel, Washington Nationals outfielder, Bryce Harper, found himself terrified. He was staying by himself in one of the regal establishment’s many rooms when an inexplicable encounter with paranormal activity signaled that he was no longer alone. “One time last summer, before I went to sleep, I laid a pair of jeans and a shirt on that table at the foot of the bed, those things in hotels that you sit on to put on your shoes. I just laid em out, simple as that. When I woke up in the morning I swear on everything the clothes were on the floor and the table was on the opposite side of the room against the wall,” he reported. “I was so flustered. I honestly thought there might be someone in the room…so I actually looked around, and then I checked to see if the door was still latched, and it was.”

Ghoulish encounters at the acclaimed, upscale hotel are old hat for the many baseball players that visit when they come into town. Various stories have accumulated over the years, including an incident reported by Brewers’ Outfielder, Carlos Gomez, who experienced a ghost that seemed to have an affinity for tinkering with players’ iPods. “Gomez was alone. His iPod was on a table across the room. Suddenly, it started playing tunes and vibrating across the table. Gomez turned it off, backed away, and then the iPod did the same thing.” Other players’ recalled being awoken by strange noises throughout the light, as well as windows and doors opening by themselves. When former Cardinals shortstop, Brendan Ryan, recalled seeing things during his stay at the hotel, he was quoted as saying, “It was more like a moving light that kind of passed through the room. It was very strange. The room got a little bit chillier…Strange things. Strange things.

Bathed in regal fixtures and antiquity, The Pfister Hotel is also thought to be haunted by former owner Charles Pfister. Many people visiting and working at the hotel have described Pfister’s ghost as a “good-natured, portly gent standing on the hotel’s grand staircase, observing the lobby, watching the living go about their business at hand.”.

Dare to be spooked and make a trip to visit The Pfister Hotel for what is sure to be an unforgettable experience. If the lore of the Old West appeals to you, then you’ll want to stop by this one-time combination hotel, saloon and bordello dating to the 1880s. Read more… 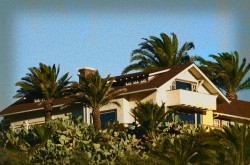 Tucked neatly away overlooking the Pacific Ocean on the easternmost point of Santa Catalina Island is the Banning House Lodge. Read more… Verify ownership of
The Pfister Hotel