The very idea of a ghost town brings to mind the visual of an abandoned Western town, all boarded up and desolate. Thrust into solitary locations with no signs of life whatsoever, they are among the most chilling of memorials to life that once was. But what about cemeteries connected to ghost towns? Bodie, California is the site of one such lasting cemetery ghost town. This former gold mining town is tucked away within Bodie State Historic Park, just outside the Bodie Hills on the Nevada state border. However, not all is pleasant for those looking to take from the Bodie Cemetery. Be forewarned now of the curse on the cemetery, for anyone who takes something from the cemetery will be struck mercilessly with bad luck.

Like all Western ghost towns, Bodie was named after a man who discovered gold there in 1859, W.S. Bodey. The area instantly became a hotbed for gold prospecting and the small town of Bodie was erected. Bustling with saloons, railroad drifters, stamp mills, and even a Wells Fargo bank, the town was cashing in on the backing of all the gold found. However, once the gold dried out, the people slowly left the town and by 1912, the town was abandoned. Of all things though, the cemetery certainly remained active.

Is The Bodie Cemetery Haunted?

The most remarkable thing about the Bodie Cemetery is that there is a particular supernatural activity that involves children. Dwelling within the cemetery is the spirit of the “Bodie Angel.” This diminutive little entity is said to be that of a young girl named Evelyn Myers. According to legend, her father was prospecting with a pickaxe and during a vicious backswing, she stepped from his field of vision and was struck. Her death was instant and her remains buried in the cemetery with her family moving away from grief. Visitors to the cemetery have reported that if they have children accompany them on a visit, they become transfixed and communicate with a sometimes unseen spirit. One family reported their child was engaged in a giggly conversation near the young girl’s grave. The parents asked the child who they were talking to, and their reply was chilling in its truth, “the little girl with the hole in her head.” Men who have toured the cemetery have also reported that they have heard a young female voice speaking out and saying the word, “daddy.” Naturally, they look around but there is nobody else in sight. Other times, visitors report hearing a child’s laughter that’s wholly out of place considering that they’re in a cemetery and there are no living children around. 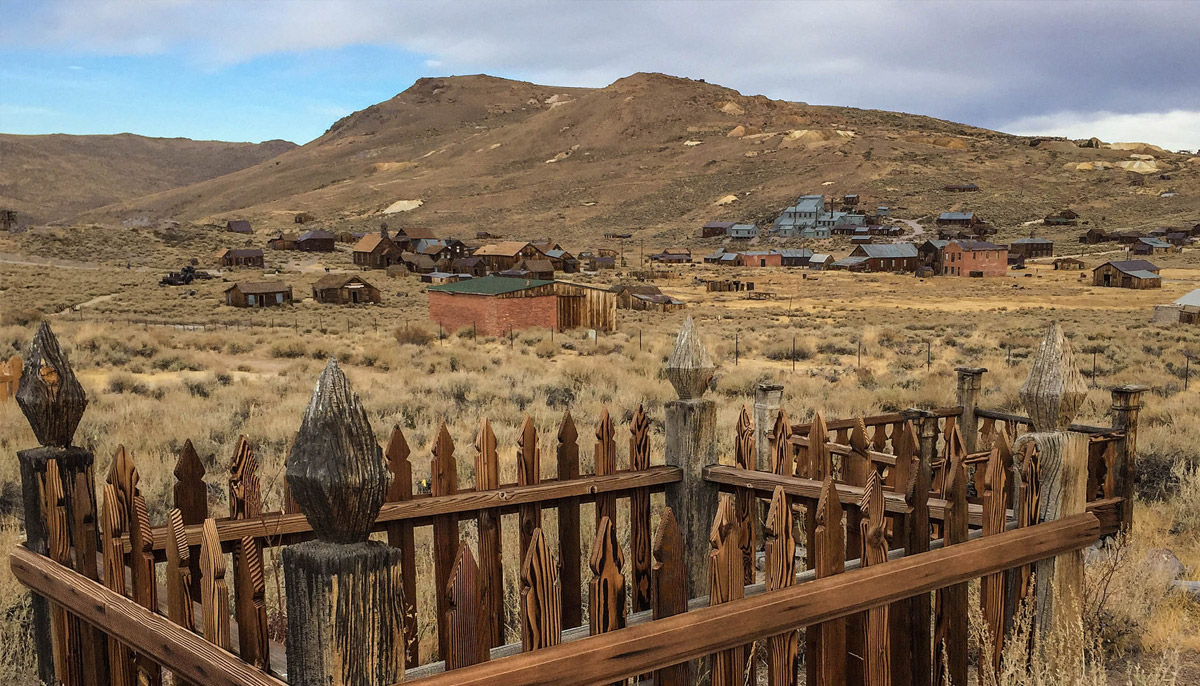 The little spirit of Evelyn is not the only female that is said to reside inside the cemetery. A fraction of the bodies in the cemetery are those of Asian railroad workers that while being employed for the railroads out West, took their chances on finding gold in Bodie. For those who perished, some claim that their spirits were not buried properly under certain Asian burial customs and as a result there is some spiritual unrest. The spirit of one such former resident, dressed solely in white has been spotted, but never photographed or filmed by visitors. She has been seen slowly walking between the graves looking lost or distraught. Other times, she has been seen sitting next to an unmarked grave and weeping. Her name and origin are unknown, but she is only referred to as the “Woman In White”, by visitors and some park rangers.

Even though there is the child’s presence at the cemetery, there is also the Bodie Curse. The popular belief is that the people who prospected in Bodie were extremely dedicated to finding and keeping their possessions. During such wild outlaw days in the heated desert, possessions were all people had. The tourist in most people have taken to slipping into their pockets a ghost town rock, or even antiquated nail. There is a very real belief that taking from this area and in the graveyard, in particular, causes the ghosts to “wake” and thus curse the individual who has taken something from them. Because the cemetery lies within the state park, it is not uncommon at all for park rangers at the station to receive in the mail an envelope or box containing a piece of something from the cemetery. Park rangers say there is always a letter accompanying the returned item with the person confessing to nothing but bad luck ever since they have taken the item. The pieces are returned to the graveyard and with no followup letters from people, it is safe to assume that the ghosts of Bodie are satisfied with the returned items and the curses called off.

Today, the Bodie Cemetery and ghost town itself are open to the public for visits, again as it resides within a California State Park. However, the park’s commission and rangers themselves advocate that any visitors be respectful and mindful of the physical and spiritual remains that are there. And above all else, do not take anything from the cemetery lest you be struck with the Bodie Curse.