Hollywood is full of celebrities, glitz and glamour, but with all of that comes scandal, tragedy and shock. Chateau Marmont has been called “the place to go to misbehave.” Henry Cohn, head of Columbia, told two young stars, “If you must get in trouble, do it at Chateau Marmont.”

With its star-studded history and a touch of infamy, the Sunset Strip Chateau Marmont hotel is haunted. It has always catered to celebrities and the elite, and to this day, the chateau is not open to the public. You must have a room booked there in order to enter the premises.

If you do book a room as an overnight guest at the chateau, don’t be surprised if you experience paranormal events. Guests and hotel employees have reported windows opening on their own, furniture moving, the sounds of voices when no one’s there, strange noises in the night, feelings of being watched, even apparitions of floating heads and the sensation of ghosts getting into bed with you.

Some claim that the ghosts of famous celebrities such as Marilyn Monroe, Howard Hughes, Boris Karloff and Jim Morrison have made an appearance at the chateau. There are those who will insist that the Chateau is cursed since some people who have stayed there have went on to encounter terrible deaths afterwards.

Scandals and Deaths at Chateau Marmont

The history of the chateau is long and varied. Sharon Tate reportedly spent time in the building as a newlywed to Roman Polanski, but shortly after leaving the chateau and while pregnant, she was stabbed to death by one of the Manson family members. Natalie Wood was rumored to have carried on an affair with her director, Nicholas Ray, at the chateau.

Where did John Belushi Die?

On March 5, 1982, John Belushi was found dead at the age of 33 in Bungalow 3 of Chateau Marmont. He was pronounced dead, having overdosed on massive amounts of liquor and cocaine. His last roles on films were Continental Divide and Neighbors with longtime friend Dan Aykroyd.

Does the ghost of John Belushi reside in Bungalow 3?

Since Belushi’s death, strange happenings and paranormal activity have increased in Bungalow 3. A family staying in Bungalow 3 in 1999, reported that their 2-year old boy was laughing and talking to himself several times. When the parents asked him who he was talking with he would say, “the funny man.” Later, when the boy’s mom held up a photo of Belushi to the boy, he replied “The Funny Man!”

Ghost Stories from the Chateau Marmont

Angela Bassett, of American Horror Story, asked the front desk if someone had cleaned her room in the middle of the night. The front desk begrudgingly responded “no.” Bassett told the story that she had left her clothes and jewelry out of sorts before going to bed, but once she awoke everything had been put away neatly and things were tidy. No explanation was available other than she had a “tidy ghost.”

A man researching a book on the rock band The Doors was in his suite in a room that the band had stayed in back in the 60’s. He awoke to the sounds of a party. Once he opened the window to see where the noises were coming from, he quickly realized the noises were in his room and all around him. He was quite disturbed and left the hotel in the middle of the night.

One woman reported that someone opened her window and got into bed with her. She was freaking out, but stayed still in bed hoping that she was unseen. Nothing happened and after awhile she looked up to see that she had bars on her window. She then noticed nobody was in bed with her, however the window had definitely been opened. 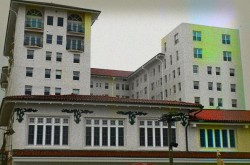 The ghost haunting the Flanders Hotel is so popular that staff nicknamed her Emily. Read more… 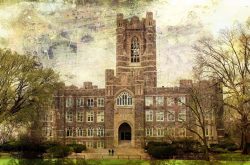 Situated on the outskirts of the Manhattan city skyline, are the surprisingly Gothic-styled school buildings of Fordham University. Read more… One of the ghosts haunting the hotel is thought to be the original owner; Japeth Rawls. Read more…